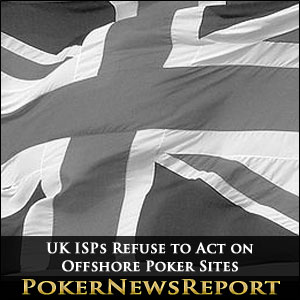 The UK Government´s plans to restrict access to offshore poker and gambling sites hit a major setback last week, when Internet Service Providers (ISPs) refused requests by the Gambling Commission to add pop-up warnings that the sites were unregulated.

Representatives of the leading ISPs said that they were not willing to act as “Internet police” on behalf of the Government, and said that it would take a court order or a primary act of legislation in order for them to comply with the Government´s wishes.

Why Offshore Sites are a Problem for the UK Government

The Government needs to address the issue of offshore poker sites if it´s Gambling (Licensing and Advertising) Bill is to get the support of online gaming companies in the UK. The proposed legislation aims to licence all gaming companies providing a service to online poker players located in the UK, irrespective of where the company providing the service is based.

This means that if a company such as Betsson (who are based in Stockholm and licensed in Malta) wanted to supply an online poker product to players in the UK, they would have to acquire a license from the UK Gambling Commission to do so. The same would apply to 888Poker (Gibraltar), Bodog (Canada), and even PokerStars.fr – which attracts a lot of UK poker players because of the standard of play on the site.

It is Not the Licences Which Are an Issue

Whereas practically all online gaming companies in the UK already conform to the Gambling Commission´s criteria for licensing (segregated player accounts, suitable level of security, etc.), the proposed legislation intends to levy a 15% tax on gross gaming revenue generated by players in the UK – which could lead to a mass exodus from “regulated” sites to offshore poker rooms.

As has been seen in Spain, high levels of taxation and licensing fees are passed down to the players via an increased percentage of rake deducted at the tables (PokerStars.es charge an average rake of 5.15% at cash game tables, whereas PokerStars.co.uk charges an average rake of 4.5%), and this often results in high volume players abandoning the regulated sites and seeking alternatives to their domestic poker rooms – a scenario which “regulated” sites in the UK are keen to avoid.

Many UK-based online poker providers believe that the new legislation is unworkable without offshore poker sites being blocked, but the Gambling Commission has no jurisdiction over the Internet, and their latest attempt to control access to offshore poker sites (such as those which reside on the Merge, Winning and Chico Poker Networks) suggests that the Gambling Commission is struggling to deal with the issue of unregulated online gaming. One commission spokesman is reported to have said:

We have been exploring the internet service providers’ approach when faced with clear evidence that sites are unlicensed and engaged in illegal activities. At this stage we are just exploring back-up options as we do not expect illegal sites to be a major issue given the attractiveness and width of the legal offer.

Down to Customer Choice

The proposed Gambling (Licensing and Advertising) Bill is expected to become law later this year, and it will be interesting to see what effect the licensing and taxation of regulated sites in the UK has on the volume of players heading over to offshore sites to play online poker. Most recreational players will hardly notice the difference, but high volume players – faced with the probability of a higher rake percentage at the tables – may decide to take their business elsewhere.

As a spokesperson TalkTalk said (one of the ISPs that met with the Gambling Commission last week), it all comes down to customer choice:

We do not believe that it is for ISPs to decide what content customers should access. It is really important that there is either a proper legal framework when it comes to blocking access to sites, just like with copyright infringement, or that it is down to customer choice.