Default anti-porn filters, recently introduced by some UK ISPs, are blocking access to online gambling sites due to their “too sexy” adult content. 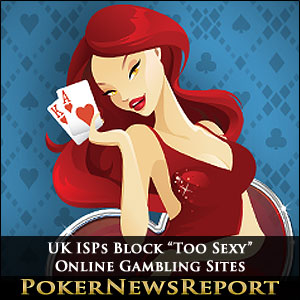 Default anti-porn filters, recently introduced by some UK ISPs, are blocking access to online gambling sites due to their “too sexy” adult content.

The family-friendly filters – which are supposed to block access to adult material – were introduced in response to UK Prime Minister David Cameron´s “protect the children” campaign. Cameron had asked the country´s four major Internet Service Providers to implement measures that would result in Internet users having to “opt-in” to access sites offering violent and pornographic images.

Sky Broadband and Talk Talk have already introduced a filtering system for new subscribers, which means that Internet users have to disable the filters if they want to access “adult” sites; while BT Broadband are still consulting with customers whether they want the filters or not, and Virgin Media has given subscribers the option of turning the filters on if they wish.

According to a report in Forbes, nearly one-fifth of the top 100,000 web sites in the UK have had access blocked to Internet users. The report uses data gathered by the Open Rights Group – who run a web site called “Blocked” – to show how a Porsche broker, a political blogger and a mum hoping to read an article about post pregnancy care were blocked by their ISPs´ over-zealous filters.

Churches and charities have been included on some ISPs black-lists, as well as sites offering help and support for drug addictions and anorexia. Not only does this prevent people from using the Internet for finding out the information they need, it also impacts the income of some perfectly innocuous web sites that rely on advertising and conversions for their funding.

Bet365 Sexiest Site of All

We conducted our own experiments on the “Blocked” web site this morning to gauge how the filters were preventing access to the favourite online poker sites. PokerStars, 888Poker, PartyPoker and several other leading online poker sites were blocked by at least one ISP (so was PokerNewsReport!), but Bet365 came off worse of those we tested – being blocked by four different ISPs.

At the moment the filtering systems are being applied to just new users taking out a broadband contract with the named service providers, but by the end of the year the default filters are scheduled to be rolled out amongst all Internet users in the UK. Consequently Bet365 will have to tone down its sexiness if it does not want to lose its market share!

A responsible gambling campaign has been launched by the Senet Group – comprising of William Hill, Ladbrokes, Paddy Power and Coral Bookmakers – that uses a recycling of the hit song “Black Betty” to warn punters about controlling their gambling. Two TV ads have currently been released (see below) – one featuring an online gambler getting frustrated with his online losses, while the second shows an in-shop gambler about to put his last £10 into a fixed odds betting terminal (FOBT) machine.

Both advertisements carry the message When the Fun Stops, Stop and Ron Finlay – Interim Chief Executive of the Senet Group – said:

Gambling companies provide fun and entertainment for huge numbers of people. But if you’re spending more than you can afford, it can lead to stress, anger, guilt and other problems. When gambling stops feeling like fun, it’s time to call it quits.

The TV advertising will be complimented by radio and press advertising, and will raise the profile of gambleaware.co.uk – a source of advice for those who have a problem with gambling.