With the recent opinion issued by the Department of Justice (DoJ) clarifying the 1961 Wire Act to be applicable only to sports betting, another law viewed by many attorneys and industry insiders as vague and requiring clarification is the Unlawful Internet Gambling Enforcement Act (UIGEA). 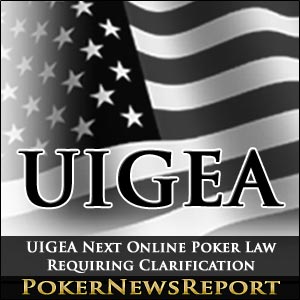 With the recent opinion issued by the Department of Justice (DoJ) clarifying the 1961 Wire Act to be applicable only to sports betting, another law viewed by many attorneys and industry insiders as vague and requiring clarification is the Unlawful Internet Gambling Enforcement Act (UIGEA).

The UIGEA was attached to the SAFE Port Act on October 13, 2006 as an 11th hour rider to the unrelated SAFE legislation that covered port security. Senate members knew the port regulations would pass and snuck in the UIGEA. Intended to prohibit the transfer of funds from banks and financial institutions to Internet gambling sites, thereby shutting down [geolink href=”https://www.pokernewsreport.com/online-poker-rooms”]online poker sites[/geolink] that require financial institutions to process payments and receive deposits from players, the UIGEA failed miserably. The amount of money funnelled to online poker sites through third-party payment processors, in addition to overall player traffic at poker sites, actually increased following passage of the UIGEA.

Specifically, the UIGEA “prohibits gambling businesses from knowingly accepting payments in connection with the participation of another person in a bet or wager that involves the use of the Internet and that is unlawful under any federal or state law.” It does not outlaw online gaming, it merely prohibits the transactions for players to fund their accounts. Notable exceptions to the UIGEA’s reach are gambling events such as fantasy sports, inter-tribal and intra-state gaming.

But one of the problems with enforcing the UIGEA is due to the fact that poker site operators are typically licensed and located offshore and not within the jurisdiction of U.S. laws. Another problem is that the UIGEA defines what a bet or wager is not, without defining exactly what a wager is, thereby creating vagueness in the law’s interpretation.

The Poker Players Alliance (PPA), the main lobbying group for online poker players, has attacked the section of the UIGEA that defines a wager as “the staking or risking by any person of something of value upon the outcome of a contest of others, a sporting event, or a game subject to chance.” The PPA views poker as a game of skill where players compete against each other and not against the “house” and a player’s success over an extended period of time will rely on skill and not chance. Games of chance are considered by the PPA to be slot machines or roulette where a player has no control whatsoever on the outcome of what number the roulette ball lands on or if the slot pays off.

The UIGEA may receive some clarification in the upcoming trial of John Campos and Chad Elie, two of the 11 named individuals in the Black Friday indictments who allegedly violated the UIGEA as payment processors for the major online poker sites. The two defendants are fighting the charges, with Elie’s attorney taking the side of the PPA by stating in his motion to dismiss the charges that the “UIGEA only applies to online poker if online poker is ‘a game subject to chance.‘”

Additionally, Elie’s lawyer states that payment processors and poker sites are not “persons engaged in the business of wagering” as defined by the UIGEA, in that neither relies on the outcome of a sporting event or contest or a “game subject to chance.” For that reason, the UIGEA violation allegations against his client should be voided for vagueness, he argues.

In establishing that the 1961 Wire Act applies only to sports betting and not online poker, the DoJ did not wholly consider the Wire Act’s relativity to the UIGEA, reasoning that it was not called for in this instance or ruling. With the Campos and Elie trial scheduled for March 12, 2012, let’s hope that U.S. District Judge Lewis Kaplan will render rulings that will clear up the ambiguity and vagueness of the UIGEA statute. With greater clarity on the UIGEA, online poker legislation in the U.S. has a better chance of succeeding.