A new social online poker site has launched in the U.S. that attempts to give more value to chips by allowing players to bid on cash prizes. 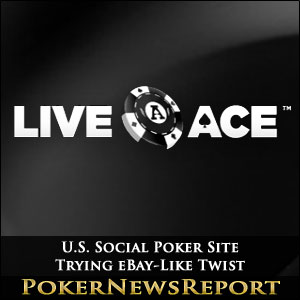 A new social online poker site has launched in the U.S. that attempts to give more value to chips by allowing players to bid on cash prizes.

Live Ace is now available to players in 31 states and the District of Columbia and follows regulations that govern the legality of sweepstakes in its operations. A certain amount of chips are available free to players with even more available by purchasing a subscription for $19.99 per month.

Chips won on the virtual felt can be redeemed for cash in daily auctions that allow players to place bids on the number of chips they are willing to put up in return for cash prizes. Live Ace determines the bid rates of each bid made and awards cash to the highest bidders until the cash pool for that particular day is exhausted.

Players making unsuccessful bids are not at risk, as the chips from all bids not selected will be returned to player accounts. Players will have to wait until the next day to offer a new bid on a new cash prize amount.

Social online poker sites have long been criticized for using play chips that are practically worthless. When chips have no value, players tend to play foolishly. It is not uncommon to see social poker players continue playing hands to showdown when basic logic on their chances of winning the hand reveals that their cards should have been mucked long before the river card is turned over.

Live Ace believes that its eBay-like daily auction in which cash can be won will make the chips on its site more valuable and inspire players to play better or correctly. Although the chips will have value, that value may actually be limited considering that winning bids will be required to undercut the bids of other players in order to be chosen for a cash prize.

Only ring games of No-Limit Hold’em, Fixed Limit Hold’em, and Pot-Limit Omaha are available. There is no tournament action at Live Ace.

Club Live members will also receive additional goodies to stand out from basic members such as custom avatars, odds calculators, and hand histories. Elite memberships can be purchased via personal check or Dwolla and those are also the payment options available to successful bidders of the daily cash pool auction.

Poker pro Andy Frankenberger has signed on as Live Ace’s ambassador and can be found playing at the site under the screen name “Franky_Style.” Frankenberger has two WSOP championship bracelets to his credit and is a former World Poker Tour Player of the Year.

Should Live Ace catch on with players, we may see the auction format copied by other social gaming endeavors. However, players who repeatedly fail to make successful and worthwhile bids may soon lose interest.