U.S. Online Poker Market Strong With or Without Regulation

As various states grapple with the idea of considering online poker legislation, it remains certain that players will play whether its regulated or not. 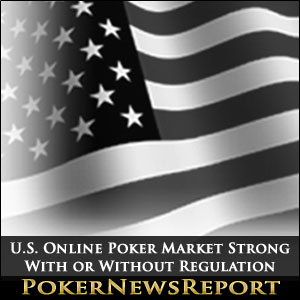 As various states grapple with the idea of considering online poker legislation, it remains certain that players will play whether its regulated or not.

This has led lawmakers from various states to voice concerns that perhaps regulation would be the best course of action in order to protect consumers. Along with that protection, a considerable amount of revenue could be had by way of taxation should Internet poker regulations be enacted.

The latest to follow this line of thinking is Iowa Senator Brian Schoenjahn (D-Arlington), who told the Quad City Times that

if people are going to do it [play online poker for real money] anyway, maybe Iowa ought to take a piece of the pie and regulate it.

A similar sentiment was expressed by Louisiana Gaming Control Board Chairman Ronnie Jones, who earlier this week informed state lawmakers that despite a law on the books prohibiting gambling by computer, Louisianans continue accessing sites and playing online poker, according to USAfriendlypokersites.com.

Indeed, the latest traffic numbers among [geolink href=”https://www.pokernewsreport.com/us-poker-sites”]U.S.-facing poker rooms[/geolink] and networks confirms what state regulators and lawmakers are saying. That despite Black Friday almost three years ago and the UIGEA statute enacted more than seven years ago, U.S. online poker players who want to play will find a way to do so at the U.S.-friendly poker sites that accept and cater to them.

Those sites happen to be numerous, with Bovada Poker leading the way. Bovada’s anonymous player format in which all screen names have been removed in order to protect less-skilled or recreational players is no longer an experiment. It has proven to be a successful endeavor and has allowed the poker room to attract more players than any other U.S.-facing sites or networks.

Players who happen to dislike the anonymous model, of which there are many, can be found logging on at [geolink href=”https://www.pokernewsreport.com/americas-cardroom”]Americas Cardroom[/geolink] on the Winning Poker Network. WPN has grown considerably in recent months, with the VIP player loyalty programs and quick cashouts at the network’s skins often cited as the reasons why. Another one of those skins, Black Chip Poker has experienced a resurgence since leaving the Merge Network and joining WPN in late 2012.

The expanse of the U.S. market has also prompted new U.S.-friendly poker rooms to appear on the scene. One such site is Full Flush Poker, which launched for real money on November 8, 2013 on the Equity Poker Network. More and more U.S. players are finding their way to Full Flush, taking advantage of favorable promotions that new sites often run in order to establish a solid customer base.

It is apparent that the U.S. online poker market will be served whether its by regulated sites that are currently found only in Nevada, New Jersey or Delaware, or by the many unregulated sites that accept players from throughout the rest of the country. State officials, whether from Iowa, Louisiana, or any other state, are absolutely correct in realizing that online poker players in the U.S. will always find a way to play poker on the Internet. May as well regulate it in order to afford greater protections for players and earn money for state coffers at the same time.

One Reply to “U.S. Online Poker Market Strong With or Without Regulation”