Lawmakers in Massachusetts and Ohio have proposed bills regarding online gambling, the former hoping to approve and the latter aimed at closing Internet cafes. 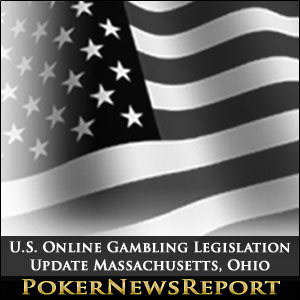 Lawmakers in Massachusetts and Ohio have proposed bills regarding online gambling, the former hoping to approve and the latter aimed at closing Internet cafes.

While many state legislatures such as California, Illinois and Pennsylvania have been considering various online poker and gambling measures, other states such as Florida have made moves in the opposite direction by outlawing Internet cafes. The recent proposals in Massachusetts and Ohio mirror those past polar opposites.

In Massachusetts, the proposal comes in the form of a budget amendment for 2014. Republicans in the Senate have proposed that the state’s three land-based casinos and one slot parlor also be allowed to offer online poker and gambling. Under the plan, tax rates would be assessed at 20% and an initial license fee would be at least $300,000. Renewals on a yearly basis would cost at least $150,000, the Taunton Daily Gazette reported.

The online games offered would not be permitted to mimic those run by the state Lottery. Players would be required to be at least 21 years of age and prove their location to be within state borders.

Massachusetts legislators approved the opening of three brick and mortar casinos and one slot parlor in 2011. Online gambling legislation attached to that bill was dropped before passage. A new measure introduced last year failed to gain support. Another proposed online poker bill added to the budget as an amendment earlier this year was also unsuccessful.

The land-based gaming operations in the state are not expected to be accepting live wagers prior to 2016. Should the latest measure win approval, its possible that online gambling could be offered to residents before players actually set foot in one of the casinos.

Ohio legislators approved HB 7 by a vote of 27-6. The bill now makes its way to the desk of Governor John Kasich, who will reportedly sign it, according to the Columbus Dispatch. The measure will limit sweepstakes machine payouts to $10, thereby putting a hit on the state’s more than 600 Internet cafes that are allegedly running illegal games.

Some lawmakers went on record as stating that HB 7 does not go far enough in outlawing the cafes. And although the bill will likely receive Kasich’s rubber-stamped approval, it can be overturned if enough Ohio residents support a possible referendum on the ballot in November of 2014.

Still to be debated are types of gambling allowed for charitable organizations as fundraisers. Veterans groups and fraternal organizations have been allowed until August to convince legislators that their particular electronic gaming offerings will conform to state statutes.

Some Ohioans have argued that the Internet cafes should be regulated instead of closed down. That sentiment was also expressed by many Floridians earlier this year when Governor Rick Scott signed a bill shutting down hundreds of Sunshine State Internet cafes. Florida’s crackdown was implemented when 57 individuals were indicted on racketeering and money laundering charges. No such arrests have been made in Ohio.