U.S. Full Tilt Players with Disputed Claims to Wait Until 2015

If you’re a U.S. player still waiting for your reimbursement from Full Tilt due to a disputed claim, expect to wait until Q1 of next year. 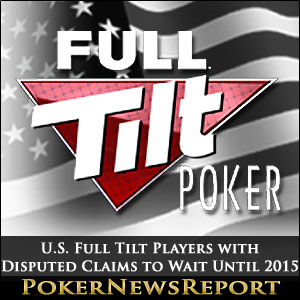 If you’re a U.S. player still waiting for your reimbursement from Full Tilt due to a disputed claim, expect to wait until Q1 of next year.

That was the time frame given by Poker Players Alliance Executive Director John Pappas after a recent discussion with the Department of Justice (DoJ). Pappas revealed information from that discussion via a post on 2 + 2 indicating that close to four years will have passed before Full Tilt claimants who have a dispute with the account balance on record with the DoJ will see their money.

Pappas informed the masses that petitioners whose disputed claims lack “sufficient or clear evidence of this dispute” can expect notification from the DoJ within 60 days via email regarding the disputed issues raised that remain unclear to claim reviewers. That email will also likely provide a due date for players to respond and to “provide clarifying information/evidence.”

Those disputed claimants who do not receive such an email can likely assume that their claims have been divided into two batches. The first batch will consist of players who attempted to cashout sometime near Black Friday, either prior to or after, and the withdrawal request was not processed. The DoJ is still considering when to set the date for accepting cashouts of this nature without requiring claimants to provide more information to substantiate their claims.

The second batch of disputed claimants will likely consist of players whose petitions contain “small discrepancies.” Claims in this batch may be approved without further inquiry from the DoJ, although it still remains unclear as to the parameters of discrepancies that can be considered small.

It is anticipated that a number of disputed claims will never find agreement between claimants and the DoJ. Players may be happy to know that an unfavorable decision by the DoJ with regard to the dispute is not the end of the line. An appeals process will be instituted in which players can protest and support their gripes with documentation.

The Full Tilt remission process has paid out roughly $95 million to about 33,000 U.S. players since the first wave of reimbursement began in late February. Obviously, the easier claims have been reviewed and addressed first while disputed claimants have been put on the back burner.

Those claimants who dispute the account balances listed on DoJ records have certainly learned patience while watching their fellow players receive cash that has been tied up since April of 2011. And according to Pappas, even more patience will be required.

However, Pappas did provide some news that will bring joy to about 600 players. Another round of payments totaling some $2 million will begin arriving in the bank accounts of those players today through Friday. The latest reimbursement batch consists of undisputed claimants who missed out on previous payments.