A meeting between the Poker Players Alliance and DoJ officials has determined that FTP players are in store for a long wait before reimbursement commences. 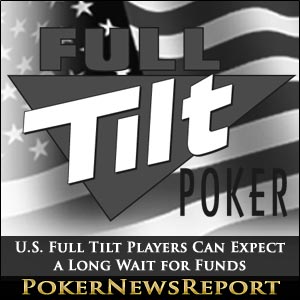 A meeting between the Poker Players Alliance and DoJ officials has determined that FTP players are in store for a long wait before reimbursement commences.

Full Tilt players located in the U.S. who were hoping to soon be reunited with their funds will need to be extremely patient as a statement from PPA Executive Director John Pappas posted on TwoPlusTwo informed players that completion of a refund claims process is a long way away. In Tuesday’s meeting with representatives of the Asset Forfeiture and Money Laundering division of the U.S. Department of Justice, Pappas learned that the DoJ has not yet selected a claims administrator to oversee the remission process and there is no current date certain for that selection to occur.

Even more troubling news for Americans who have been owed more than $200 million since Black Friday is that once an administrator is finally hired, forfeiture and remission procedures require that a substantial administrative process be adhered to before players begin seeing their funds. To put it more succinctly, expect a substantial amount of time to pass before reimbursement begins. The DoJ is suffering from staffing and resource limitations on top of the fact that there are numerous other forfeiture cases that are ahead in the queue.

On behalf of poker players, the PPA also informed DoJ officials that players are expecting to receive their entire account balances in addition to compensation for any accrued Full Tilt player points. The DoJ allowed PokerStars to fully repay U.S. players after seizure of the dot.com domains on Black Friday. However, some observers speculate that the DoJ may be reluctant to recognize the entirety of player winnings. Pappas stated that these crucial matters were well-received by DoJ honchos. But he emphasized that no decisions have been made at the DoJ regarding the manner of repayment of player balances.

The meeting also touched upon the PPA’s desire to be part of the repayment plan, suggesting a streamlined process for submitting claims and receiving funds. The issue of authenticating and verifying the identities of players need to be flexible, Pappas said. Though not confirmed by the DoJ, Pappas is hopeful that the DoJ has sufficient means to authenticate players based on [available] records.

Pappas felt that the sit-down with DoJ officials was cordial and productive and promised that the PPA will do everything it can to help the DoJ get the process moving as soon as possible. However, the reality for U.S. players is that the DoJ has not made much progress at all except for posting an opening for a claims administrator position. While rest-of-world Full Tilt players received $184 million upon the site’s relaunching just one week ago, players in the U.S. are forced to continue to wait. And nobody knows how long the wait may be.