WSOP executive director Ty Stewart is still well in contention in event #1 of the 43rd staging after ending Day 1 at the Rio All-Suite Casino in 10th place. 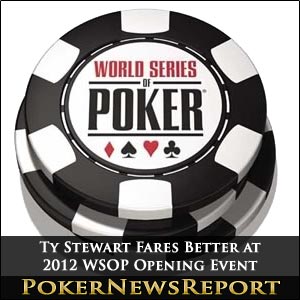 World Series of Poker (WSOP) executive director Ty Stewart is still well in contention in event #1 of the 43rd staging of the biggest poker festival on the planet after ending Day 1 of the $500 buy-in Casino Employees No-Limit Hold’em tournament at the Rio All-Suite Hotel & Casino in 10th place.

An impressive 732 players signed up to this year’s first event in Las Vegas, which got underway after tournament director Jack Effel introduced long-time dealer Richard Turnbull to utter the four famous words: “Shuffle up and deal.”

Eleven levels were played out before the chips were bagged up, leaving Chip Saechao top on 150,600 for a healthy lead over second placed James Routos, who ended Day 1 on 146,900. Matthew Wilmot also enjoyed a consistent day, remaining among the big stacks throughout to finish in third place on 122,800.

But Stewart also had a pretty good opening day to take 10th spot on 69,900 chips as the field was chopped down to just 46 survivors – all of whom will be paid at least $1,281 after the money bubble burst in level 9, although they will all be aiming to pocket the $70,859 and bracelet reserved for first place.

Certainly, this was a much better opening day for Stewart, who last year exited on Day 1 of an event that was won by Californian Sean Drake for $82,292 after outlasting 849 opponents.

However, there will be a new name on the winners’ list as Drake exited during level 2, when the blinds were just 50/100. His last hand saw Drake, on the button, go all-in for 1,050 chips to be called by the unnamed small blind.

Drake showed J♠ 8♥ while his opponent held 6♠ 6♣ ahead of the 4♠ 9♣ A♣ flop. There was no help there for Drake, while the 9♥ turn meant there was a pair on the board – meaning Drake required an ace, jack or eight to survive. Unfortunately, for Drake, the river only brought the 5♦ so confirming his elimination.

However, former Full Tilt Poker Pro Karina Jett failed to last the day after she was unable to increase her short stack when moving all-in for 4,000 with ace-six – only to be called an opponent holding pocket queens. The Vegas-based player got no help on the board and was gone from the event, and was later joined at the rail by American tournament director Matt Savage.

Today’s play will see a winner crowned, while the first open tournament of the festival – the $1,500 buy-in No-Limit Hold’em event #2 – also kicks off in Vegas.