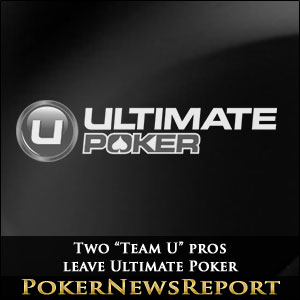 Ultimate Poker has experienced its fair share of problems. As the first regulated online poker site in the United States, there were some that expected it to capitalize on its unique position in the market. Sadly, it did not. And now, two of its sponsored pros, Tom Marchese and Randy Dorfman have opted to abandon their contracts with the fledgling site.

The announcement comes only one month after Tom Marchese elected to sign on. Although there has been no official confirmation from the young superstar, Dorfman recently tweeted that Marchese left the site for many of the same reasons that he did.

In regards to his decision to leave, Dorfman stated

I have resigned from Ultimate Poker as their Team Pro. At this point in my life there are more important and creative things for me to be involved with. To have your ideas and experiences from the game I love fall of deaf ears while you bust your ass to build a game for a new company just was extremely frustrating to me.

Dorfman isn’t the only one that feels Ultimate Poker is underperforming. The site struggled through a host of launch issues, and despite implementing a software patch and VIP program, it comes across as a far less sophisticated and user friendly online poker client than most well-established brands.

Although the patch helped the site bounce back from a three-month low, its player base remains remarkably mediocre. On any given weeknight, the site averages about 200 cash game players and its low buy-in tournaments rarely draw more than 300 players.

Shortly after launch, Ultimate Poker signed a wealth of young up-and-coming pros: Lauren Kling, Phil Collins, Gavin Griffin and Dan O’Brien joined Dorfman on the Team U roster. Dorfman is a recognized pro with live career earnings of over $1.4 million including a runner-up finish at the $25,000 EPT – Grand Final High Roller Championship in 2009 and a fifth place performance at the 2011 Aussie Millions Poker Championship.

Marchese has been having a year to remember. After winning the 2012 WPT Super High Roller last May, he’s taken down four other smaller titles. He also placed fourth in this year’s WSOP Event #61, widely regarded as the Omaha Championship.

Both players’ photos have been taken down from the site, although Marchese’s “Team U” bio can still be found. Notably, Gavin Griffin’s photo is missing as well. Could he be next?