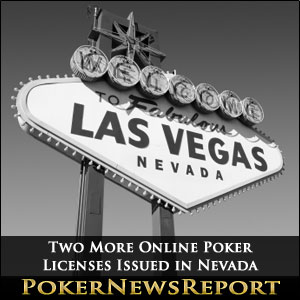 The commission heeded the recommendation of the Nevada Gaming Control Board, which gave its blessing earlier this month to both companies to participate in Nevada’s intrastate online poker scheme. Sartini Synergy was approved as an operator, while Lottomatica is licensed as a service provider.

Lottomatica is headquartered in Italy but does operate subsidiaries worldwide, including Spielo and GTECH in the United States. The company announced yesterday that it will change its name to GTECH. The re-branding is expected to take place throughout 2013 and is part of an overall plan to integrate its business interests under three specific global regions. One of those regions, of course, is the U.S. The name change is dependent, however, on shareholder approval.

Sartini Synergy is a subsidiary of Golden Gaming, which is centered and operates several casinos in Pahrump, Nevada. Throughout the Silver State, Golden Gaming operates slot machines in over 600 locations, accounting for roughly 45% of the state’s slot machine market.

The number of licenses issued by the gaming commission now numbers 19 since Silver State gaming officials began scrutinizing the more than three dozen companies who have applied for licensure. The first license was awarded to Bally Technologies in June of last year and both the control board and the commission have had a busy six months in reviewing applications in the two-step process.

Many believed that the first legal [geolink href=”https://www.pokernewsreport.com/us-poker-sites”]U.S. online poker sites[/geolink] would be in operation by now, but delays in laboratory testing have pushed the launch date to an unspecified time in the future that is now expected to occur sometime this Spring. Nevada lawmakers are hoping that those online poker sites may someday allow players from other states to also be included in the player pool. An amendment to the current statute that will permit interstate online poker with other states who have approved similar legislation is now under consideration.