Regulation of online poker in the United States continues to make progress as two hearings on online gaming have been scheduled for next week before Congressional committees. 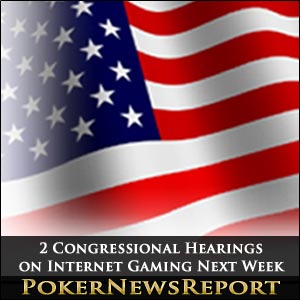 Regulation of online poker in the United States continues to make progress as two hearings on online gaming have been scheduled for next week before Congressional committees.

The U.S. Senate Committee on Indian Affairs will hold the first of the two hearings on Nov. 17 entitled, the “Future of Internet Gaming: What’s at Stake for Tribes?” Poker Players Alliance (PPA) Chairman Alfonse D’Amato has been invited to testify as a witness, just as he did in an internet gambling committee hearing last month.

On the following day, Friday, Nov. 18, the House Subcommittee on Commerce, Manufacturing, and Trade will also convene to discuss online gambling. The topic of Friday’s hearing is “Internet Gaming: Regulating in an Online World.” This is the second hearing in as many months before this particular House subcommittee. Last month’s topic, “Internet Gaming: Is There a Safe Bet?” focused on consumer protection. D’Amato also testified at that hearing, as did FairPlayUSA Chairwoman Parry Aftab and National Indian Gaming Association (NIGA) chairman Ernest Stevens, among others.

A Senate committee has not debated the issue of internet gaming since 2006, making next week’s hearing a turning point for proponents of online poker legislation.

It’s significant, said PPA Executive Director John Pappas. Even though the subject matter may be limited to how this impacts Indian tribes, the PPA being able to testify will insert the positive reasons for consumers into the discussion. Were we not to testify, I’d be more concerned, but I feel much more optimistic now.

The U.S. Senate Committee on Indian Affairs asked D’Amato to testify at the hearing, noting his involvement and testimony in last month’s subcommittee hearing. They invited him, Pappas said. They recognized that the PPA is the leader in the discussion and welcomed our presence there to help educate them about internet gaming and the marketplace today. We obviously have thoughts on how tribal governments can play in this market. They saw all of that and wanted us to testify.

Pappas also added that D’Amato is a logical choice as a witness. As a former Senator from New York who served his constituency for three terms, D’Amato garners a great deal of respect by his Senate colleagues.

Many online poker players in the U.S. will indeed be encouraged by the fact that progress is being made on regulating the industry. However, Pappas pointed out that these hearings are fact-finding opportunities for lawmakers and that any possible legalization of online poker is still in the preliminary stages.

These are informational hearings, Pappas said. There won’t be votes at these hearings, but these do set the stage for a vote, at least on the House side, very soon, perhaps after the Thanksgiving recess. It’s encouraging that the House subcommittee is acting so quickly. They could have punted to after Thanksgiving, but they chose to tackle it before the break.

Lawmakers on the Senate committee are expected to ask the hearing’s witnesses many questions, making certain to consider tribal rights in any future internet gaming regulations. The Indian community has a lot of questions, Pappas admitted. They’ve been behind the curve on planning for this natural expansion of gambling. This is an opportunity for them to express their concerns about the issue.

As of this writing, the complete witness lists for the hearings hasn’t been made public. However, both hearings will be able to be seen live online.