The race towards the arguably the most prestigious prize in poker is on as only 78 players remain in this year’s Players Championship. 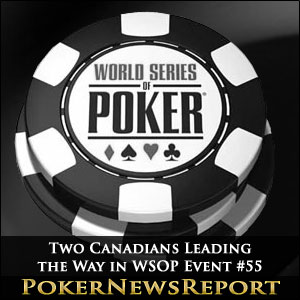 The race towards the arguably the most prestigious prize in poker is on as only 78 players remain in this year’s Players Championship.

Perhaps it’s only fitting that July 1st is Canada Day. Having already won a record-setting ten bracelets in this year’s WSOP, Canadians are making another strong showing in Event #55 – The $50,000 buy-in Players Championship eight-game mix.

The event, which brought out many of the most well-rounded poker pros in the world, drew 132 players in total – the most since 2008. Not only will the winner net over 1.7 million in cash, he (or she) will also be awarded with WSOP gold and the Chip Reese Memorial Trophy. To some, winning the Players Championship is a more grandiose feat than taking down the amateur-laden Main Event.

Day 2 began with most players still in the hunt. That would quickly change as top pros Phil Galfond (who just came off a second place finish in the $25k six max), Phil Ivey, Phil Hellmuth and Daniel Negreanu would fall in rapid succession. Two-time Players Champion Michael Mizrachi also did not have a good showing, and finished a very disappointing 113th. After having turned a straight with K♦10♦, the “Grinder” called off his remaining chips after Cole South rivered the nut flush and shoved over Mizrachi’s river bet. Mizrachi was obviously frustrated with the turn of events, and left the table clearly distraught.

If Mizrachi were to ever win a third eight-game title, it would be one of the most marvelous accomplishments in poker history. But for now, he’ll have to wait at least one more year. Better luck in the Main Event.

As play winded down, David Benyamine would best fellow Canadian and bracelet winner Jonathan Duhamel for the chip lead. With the chip average residing around 254k Benyamine is sitting on a very healthy 729k, with Duhamel close behind at 666k.

Whiz kid Shaun Deeb resides in ninth and Brian Rast in seventh. Both are considered serious contenders to take down the title. And let’s not forget about Doyle Brunson. Although “Texas Dolly” needed a miracle to stay alive, he ended the day with an aveage stack of 250k plus. This was Doyle’s first appearance in a WSOP event this year.

Greg Mueller, who is sitting in 39th place with 227k chips, is another Canadian who could prove to be a dark horse. The former pro hockey player is a proud countryman who has already registered three final tables in this year’s WSOP, two of which were in mixed games events.

Regardless of whether Canadian brings home its 11th bracelet of this year’s World Series, 2013 will always be remembers as the year of the Canadian. Oh Canada!