Tuan Phan led outlasted 617 players and left the Harrah’s Atlantic City main event of the World Series of Poker Circuit (WSOPC) with the title and $188,830. 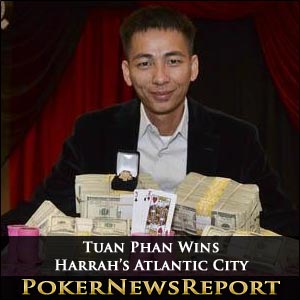 American Tuan Phan led from the front to outlast 617 other players and leave the Harrah’s Atlantic City $1,600 buy-in main event of the World Series of Poker Circuit (WSOPC) with the title, $188,830 in prize money and a WSOP National Championship seat in May.

It took three days for the dominating and determined Virginian – who sent an incredible eight of the other nine final table players to the rail – to emerge victorious from an event that showed a massive 76% increase on last year’s 352-player field to become the second biggest main tournament staged by the WSOPC with a prize pool of $899,190.

Once Canadian Marc Andre Roy had become Day 2 chip leader Phan’s seventh victim at the final table, we were left with just Hao Le to take on his all-conquering fellow Virginian.

The duo stayed neck-and-neck for the majority of their match-up, but the last hand did arrive after about 45 minutes’ play.

Le took his time to gather is thoughts, but then re-raised to one million. Phan called before the turn provided the players with the 3♦. Le placed 900,000 into the massive pot, and Phan went all-in to be snap-called by Le.

Phan showed K♥ 3♣ for trip threes, much to the dismay of Le, who revealed pocket aces. Le required an ace to stay in the tournament, but the was the 8♦ – and Phan, who was dominant throughout, was crowned champion.

Just 20 players remained for Day 3, but that was cut down to 10 survivors within the opening two levels of play.

But it was Danny Rohde – who had started the final table in fourth place – that exited first for $14,099.

Phan, however, quickly called to table Q♣ 10♣ to leave Rohde in front, although Phan made a flush on the A♣ turn and that was it for Rohde.

Phan continued his rise by next eliminating New Jersey’s Mike Devinsky in ninth for $17,516.

The flop included a queen to give Phan trips to move him further ahead in the pot, with Devinsky’s hand unable to improve.

The third player to suffer the wrath of Phan was Denis Gnidash just 10 minutes later as the New Jersey player, holding A♥ K♠, went all-in pre-flop.

However, he faced the pocket sevens of Phan, with the 2♥ 8♠ 8♣ 7♦ Q♠ board giving the latter a full house for a hat-trick of eliminations at the final table.

A third New Jersey pro hit the rail not long after when Kevin Kaikko was knocked out by Nguyen for seven place and $28,127.

The action had folded to small blind Nguyen before he raised. Big blind Kaikko went all-in, and Nguyen called.

Kaikko showed A♠ K♠ to be way ahead of Nguyen’s A♥ J♣, but the flop revealed 7♥ J♦ 7♠ to give the latter the lead. The turn provided the A♣, which changed little, before the 10♣ sealed Kaikko’s fate.

Phan was back just two hands later to eliminate his fourth player, Boston’s Anthony Zinno, in sixth place for $36,372.

Zinno called with pocket sixes, while Phan showed K♠ J♣. He paired the jack and that was Zinno hitting the rail.

Fifth place went to Nguyen, for $47,684, after Phan also eliminated him.

Nguyen opened with a 150,000 bet and small blind Phan called for the duo to see a flop of 5♥ 4♠ A♦. Phan moved all-in and Nguyen instantly called to confidently turn over A♣ Q♦.

Phan showed 2♠ 2♥ to be only just ahead. But, following the 7♠ on the turn, the 2♣ river gave Phan trips to eliminate Nguyen.

Larry Riggs became Phan’s sixth victim not too long after when the ultra-tight North Carolina native exited in fourth for $63,375.

Big blind Riggs went all-in after Phan, on the button, had bet 150,000. Phan made the call to reveal pocket jacks and was faced by the pocket fives of Riggs.

Despite his sincere pleading to the dealer, Riggs could not find a third five as the board showed 8♥ 8♣ 6♦ 4♥ Q♦.

Incredibly, Phan secured a seventh elimination just a few hands later when sending Canada’s Roy to the rail in third place for $85,405.

Roy then check-called another 150,000 bet from Phan, before both checked the 2d on the turn. The 5♣ arrived on the river and Roy again checked, while Phan threw 300,000 into the ever-growing pot.

Roy immediately moved all-in and Phan called to show a full house for his hole cards of K♥ 2♠, which beat an upset Roy’s two pair from his K♠ 5♥.

That left us with Le and Phan to battle it out for the top prize – and the latter was to prevail from a thrilling final table.

New York State’s Peter Ippolito managed to cash twice at this latest leg of the WSOPC, but couldn’t add a second victory to his success at the $555 buy-in No-Limit Hold’em event for $37,926.

However, Ippolito did leave with an additional $4,388 for securing 33rd place in the main event.

The next WSOPC stop arrives at The Bicycle Casino in California for a January 1 to 12 tournament that also possesses a $1,600 buy-in main event.