The Trump Taj Mahal has been bailed out by billionaire Carl Icahn and will remain open, ending previous threats of a shutdown made by Trump Entertainment. 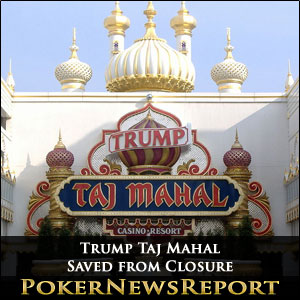 The Trump Taj Mahal has been bailed out by billionaire Carl Icahn and will remain open, ending previous threats of a shutdown made by Trump Entertainment.

A restructuring plan that was approved in a Delaware bankruptcy court last week will permit Icahn to take hold of another Atlantic City casino. The real estate investor obtained the Tropicana five years ago, also as part of bankruptcy proceedings.

Trump Entertainment was forced to file for bankruptcy last September and closed Trump Plaza just a few days later. That was one of four New Jersey casinos that bit the dust in 2014, along with the Atlantic Club, Showboat and Revel.

Competition from casinos in nearby states was the cause of the demise and also threatened a shutdown of the Trump Taj Mahal. In stepped Icahn, who headed a team that provided financing in the ballpark of $20 million to Trump Entertainment in order to keep the casino operating.

As part of the plan to restructure, Icahn will control both Trump casinos. A conversion of debt into equity of around $292 million will allow for reorganization. Icahn must also infuse $13.5 million in Taj Mahal funding following bankruptcy protection proceedings, Bloomberg reported.

Icahn staved off those who opposed the plan by agreeing to a deal with Donald Trump and unsecured creditors. Donald Trump has not been part of the operations of the Atlantic City casinos that bear his name for a decade. His name will remain on the Taj Mahal and the reality TV star has agreed to voluntarily dismiss a lawsuit that attempted to remove his name from the casino due to its condition and disrepair.

Union workers at the Taj Mahal have been battling Trump Entertainment for months as about 1,100 casino employees opposed the abolishment of a labor deal. U.S.Bankruptcy Judge Kevin Gross permitted that deal to be nullified and Unite Here Local 54 appealed.

That appeal has yet to be resolved, but if the judge’s decision is upheld, Icahn will take over and the reorganization will commence. If the appeal judges reinstate the union contract, Icahn would be permitted out of the plan to restructure.

Eight casinos remain operational in New Jersey currently. That number is dwarfed by neighboring Pennsylvania and the dozen casinos that accept wagers in the Keystone State. However, Pennsylvania is now experiencing decreasing revenue and increased competition from casinos in its neighbor states, which may eventually lead to the regulation of online poker and gambling perhaps this year or next.