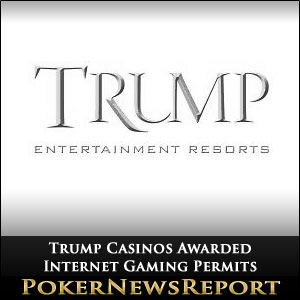 New Jersey took another decisive step towards launching Internet gaming, as both Trump Casino and Trump Taj Mahal were issued online gambling permits by the New Jersey Division of Gaming Enforcement. The announcement comes on the heels of the Golden Nugget being awarded New Jersey’s second gaming permit. The Borgata, in conjunction with PartyPoker’s parent company bwin.party, received the first permit last week.

When asked to comment, Robert Griffin, the CEO of Trump Entertainment Resorts stated,

We are very pleased to get the third and fourth permit. We think this is a significant move for Atlantic City and for the Trump company. We’re going to make the deadline of November.

Any casino hoping to launch on the go-live date of November 26th must first participate in a five-day invite only trial period, beginning no later than November 21st. New Jersey is the third state to offer online gambling, following in the footsteps of Nevada and Delaware. Intrastate compacts between the three states are expected by 2014, which in theory should broaden the appeal of US-based gambling sites.

Trump Taj has partnered with Ultimate Gaming, the company behind UltimatePoker.com. Ultimate Poker was launched in Nevada last spring, making it the first state regulated poker site in the United States. Despite several software issues and initially low traffic, the site, which recently implemented a VIP structure, is beginning to show signs of life.

It should be noted that while four of New Jersey’s twelve casinos have been issued Internet gambling permits, none of their partners have been approved to operate within the state. Ten casinos have already announced their online gambling plans, leaving only the struggling mega-casino Revel and the Atlantic City Club Casino.

In order to participate in online gambling activities in New Jersey, players must be physically located within the state. Now, that doesn’t mean they have to be a resident, in so long as the geolocation technology built into the operating system recognizes their location.