There is a new sheriff in town following Tristan Wade´s victory in the €3,200 WSOPE NL Hold´em Shootout Championship. 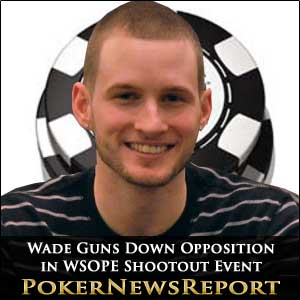 There is a new sheriff in town following Tristan Wade´s victory in the €3,200 WSOPE NL Hold´em Shootout Championship.

The young American, who is enjoying a successful first visit to Europe, followed up his deep run in the 6-Max bracelet event with success in the shootout after avoiding any early jostling for position and then playing to his strengths when the final became short-handed.

Reaching the final table was an achievement in itself for Tristan Wade. In the first round of the Shootout, Tristan Wade was involved in a protracted battle against Ukrainian new-kid-on-the-block, Oleh Okhotskyi (second in last year´s EPT San Remo Main Event), which meant his was one of the last 10-handed tables to complete on Day 1. In the three-handed section of the tournament, Wade was drawn against Italian Salvatore Bianco and the experienced WSOP campaigner David Peters (10th in last year´s WSOPE Main Event). Again he was one of the final players to win their second leg and progress to the final table.

Once at the final table, the roll-back of the blinds to 1,500/3,000 meant that each player had around 80 big blinds – sufficient for Wade to sit back and allow the more aggressive players to lead the action. Consequently, by the time John Armbrust (10th), James Dempsey (9th), Taylor Paur (8th) and Emir Patel (7th) were eliminated, Wade was fifth of the remaining six players – although not in any trouble as he still had over 30 big blinds in front of him.

Two neighbouring hands saw Tristan Wade leap to the head of the chip stacks. In the first he crippled Steve O´Dwyer – who had been pursuing a shove or fold policy – when O´Dwyer A♦ K♥ failed to catch against Wade´s 9♣ 9♦, and then took a massive pot from Michael Watson when his A♥ 10♦ caught a flop of 10♣ 3♣ A♦. Shortly after, Wade (A♠ J♠) eliminated the short-stacked O´Dwyer (K♣ J♦) when neither player was able to pair up on a mixed board.

To a Million and Beyond

Tristan Wade became the first player to crack the million chip mark when coming from behind to claim a 248,000 chip pot against Richard Toth, and then bust UK poker player Max Silver in a K♣ K♠ versus 4♣ 4♠ race in which neither player was able to improve their opening hand. However, Tristan Wade was not going to have things completely his own way. Michael Watson caught a set of sixes to eliminate Bertrand “ElkY” Grospelier and then claimed the chip lead when taking Wade for almost 450,000 chips when he hit Kings over Threes.

Michael Watson was also responsible for the elimination of Richard Toth in third place when the Hungarian moved his last quarter million chips in with Q♣ 10♥ and was called by Watson holding A♣ K♦. The rail supporting Toth cheered loudly as the flop revealed Q♥ J♦ 6♣, but their cheers turned to cries of despair as the 10♣ was dealt on the turn to give Watson a Broadway straight. Going into the heads-up, Watson had a clear advantage of 1,378,000 chips as opposed to Wade´s 985,000 – but this was not to prevent the young American from going on to capture the title.

Despite a relatively subdued beginning to the finale, the chips were only going in one direction – into the stack of Tristan Wade. As the blinds rose to 10,000/20,000, Wade took advantage to three-bet Watson out of the pre-flop action, and drew level with his opponent without one hand going to showdown. Three consecutive check-raises took Wade into a chip advantage as well as a mental one, and even when Watson doubled up with K♠ 10♠ versus J♥ J♠ (the King pairing on the flop), Wade still held the advantage.

Tristan Wade might have had reservations about calling Watson´s A♥ 5♥ shove when again holding Jacks (J♠ J♥) a few hands later, but this time there was no Ace dealt to save Watson, and Tristan Wade became the first winner of a shootout event at the WSOPE. His victory earned him a first prize of €182,048 and his first WSOP bracelet. Watson received €112,526 for his second place finish and a lesson in aggressive poker from the new sheriff in town.

All 30 players who won their respective tables in the first leg of the shootout were assured of receiving €6,913, and the ten players who made the final table were guaranteed a minimum of €12,981. 258 players entered the event in total, creating a prize pool of €743,040 which was distributed among the top ten finishers as follows:-