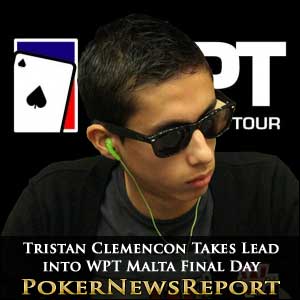 The London-based French poker player, who has an impressive string of live poker cashes the world over, dispatched five of the final thirty participants in the event to the rail on Day 3 of the tournament, which concluded with only eight players in the hunt for the $273,200 first prize.

Prescaglini Loose but Still in the Game

Overnight chip leader from Day 2, Cecilia Prescaglini, maintained her lead for most of the day. Despite receiving an early setback when Marvin Rettenmaier completed a runner-runner diamond flush, she recovered from her chip stack being slashed to 485,000 to lay in second at the end of the day – primarily at the expense of November Niner Matt Giannetti against whom she tripped over Queens. Her loose style of play throughout the three days has drawn criticism from many who have been watching her, but she is still in the game and guaranteed a minimum payout of $22,894.

Matt Gianetti secured his seat on the final day at the expense of Simon Trumper – and again Queens played a vital role. Trumper was ahead in the penultimate hand of the day when his A♦ 10♠ caught two pairs on the flop of A♠ 10♦ 6♠ against Giannetti´s A♥ Q♣. However, the Q♦ on the river saved Gianetti and sent Trumper into a mini-tilt – one which was to prove expensive in the last hand of the night when he ran his A♠ 10♠ into Christofer Williamsson´s flopped set of Twos. Fortunately there were no further hands to be played and Trumper remains in fourth place overnight with 631,000 chips.

Gone but Not Forgotten

The three unfortunate players who were to start the day with hope but end with nothing when falling just outside of the bubble were French restaurateur-ess Nesrine Kourdourli, the player who knocked out Phil Hellmuth – Andras Fekete – and the much-liked Italian Giovanni Rizzo. Once the bubble had burst, the play loosened up considerably and we quickly saw the back of Justin Bonomo (26th), Tony G (25th) and UK poker player Mark Norman (23rd).

In the rush to the final table, it was Tristan Clemencon who finished best – dispatching Marvin Rettenmaier in 16th when his Aces held against Rettenmaier´s AK, eliminating Fabio Montanari in a straightforward Kings v Queens race and hitting Aces again to send Salvatore Bianco to the rail in tenth. His final victim of the night was Manfred Sierke, who moved all-in with Q-6 on a board of Q-4-3 / 2 to by snap-called by Clemencon with 5-6 for a readymade straight.

When play recommences later today, blinds will be 6,000/12,000 with an ante of 2,000 chips. Filippo Bianchini will be the primary target with only 188,000 chips remaining, but several players just ahead of him will be sweating for the big pot which changes their fortunes and provides them with an opportunity to take on Tristan Clemencon.