Tripp Kirk has picked up a cheque for $190,961 after outlasting a 625-strong field to take down the WSOPC Harrah’s St Louis main event in Missouri. 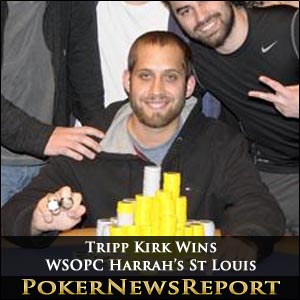 Atlanta’s Tripp Kirk has picked up a cheque for $190,961 after outlasting a 625-strong field to take down the World Series of Poker Circuit (WSOPC) Harrah’s St Louis $1,620 buy-in No-Limit Hold’em main event at Maryland Heights in Missouri.

The 27-year-old faced Missouri’s Tim ‘Killer’ Killday in a thrilling but short-lived heads-up clash before emerging victorious to leave the runner-up with a rather nice $118,119 consolation prize.

With his victory, semi-pro Kirk – who also earned $26,253 for finishing third in the $335 buy-in No-Limit Hold’em Re-entry and $3,414 with his 15th place finish in the $1,090 buy-in No-Limit Hold’em event at this latest stop of the circuit – now has two WSPOC gold bracelets, as well as a place at this summer’s $10,000 buy-in National Championship in Las Vegas to look forward to.

Kirk’s first bracelet arrived in February of last year when he pocketed $25,220 for winning the $555 buy-in Six-Handed No-Limit Hold’em crown as part of the WSOPC Harrah’s Tunica stop. He now has 10 WSOPC cashes for a $268,251 in total earnings from the tour.

With the prize pool reaching $909,375 in what was a record-setting field – about 39% up on last year’s 449 entries – Kirk secured easily his biggest cash from his four years of seriously playing the world’s best game in what was a thrilling climax to the event.

Killday checked before Kirk made a 200,000 bet, only for the former – after some thought – to shove all-in on what turned out to be a bluff. Kirk immediately called to show A♥ 2♣ for two pair, while Killday revealed Q♥ 10♠ to be beaten, even before the 9♦ came on the river.

A total of 21 players started the third and final day of the main event, although that was quickly cut down with Missouri’s Michael McKuin busting within minutes of the start for an $8,021 pay day.

The likes of four-time WSOPC winner Alexandru Masek, of San Diego, crashing out in 20th for $8,021 in his quest for a record-equalling fifth bracelet, it didn’t take too long before 10 more players had hit the rail – including final table bubble boy Brian ‘Big Kat’ Davis, of Oklahoma City, in 10th place for $14,259.

With the veteran all-in, the 5♦ turn and 8♦ river gave him no help and he hit the rail in ninth place.

Again, the hand was almost over very quickly as the 10♠ 5♥ 4♣ flop gave Conrad trip tens and a massive lead. The Q♣ on the turn ensured him of the knockout, with the J♥ river a dead card.

Jeff ‘Anaconda’ Fitzgerald Out in Seventh

Not long after that elimination, another Missouri entrant, 22-year-old service technician Jeff ‘Anaconda’ Fitzgerald, was collecting $28,445 in seventh place.

Fitzgerald checked on an A♠ 8♥ 9♦ flop, only for Charles ‘Woody’ Moore, of Dallas, to bet 200,000. The former responded by check-raising to 460,000, with Moore then swiftly moving all-in for Fitzgerald to call.

The showdown saw Fitzgerald table A♥ 9♠ for top two pair, while Moore showed 8♦ 8♣ for trips. Fitzgerald needed a nine or an ace to stay alive, but the 5♦ turn and 4♥ river made sure of his exit.

Tennessee pro Bradley ‘Tip’ Lipsey – an online specialist – was next to hit the rail in sixth place for $36,784 to ensure that he is a force to be reckoned with after only taking up live tournament play this past year.

Lipsey bet 130,000 and was called by Killday, who then led out for 300,000 on a 9♥ Q♦ K♥ flop. Lipsey – who now has five WSOPC cashes this season, including three final table appearances – gave his next move some considerable thought before shoving.

Killday snap-called to show J♦ 10♣ for a straight, while Lipsey tabled K♦ 5♦ for top pair. The latter was left drawing dead moments later when the dealer placed the 7♥ on the table. Of course, the 10♣ meant nothing and that was that for the up-and-coming 28-year-old.

Just minutes later, Gannesh Letchumanan was also seeking out the cashier, for $48,224, after Kirk eliminated the Virginia player in fifth place. Letchumanan shoved all-in pre-flop to receive a call from Kirk, with the former showing K♥ Q♠ and the latter revealing A♣ 10♥. The board eventually showed Q♦ 6♣ A♥ 10♣ 7♥ to give Kirk two pair and the knockout.

Fourth place went to Moore – who picked up $62,584 for second place at the recent WSOPC Council Bluffs main event – for $64,093 after his elimination at the hands of Kirk.

Kirk flat called, before then snap-calling Moore’s all-in move on the 3♥ turn. Moore already knew he was in deep trouble before showing his J♦ 9♣ hole cards. Bit he could hardly have expected Kirk to reveal K♣ 10♣ for the nut flush. The 6♥ river confirmed Moore’s exit to leave the event three-handed.

That soon became two-handed when Conrad – who had begun the day as chip leader – exited in third place for $86,372. He got involved in a raising battle pre-flop that saw him all-in while holding Q♠ Q♦, only to be faced by the K♦ K♣ of Kirk.

It only got worse for Moore when Kirk made it trips on a K♥ 6♠ 5♣ flop, with the 3♦ turn and 8♣ river ensuring the knockout.

The penultimate WSOPC stop for this 2011-2012 season pulls into Harrah’s Chester, in the Philadelphia area, on Thursday for another 12 days’ play until May 7, while the final leg of the tour arrives at Harrah’s New Orleans from May 10 to 21 – just six days before the World Series of Poker kicks off in Vegas with the $500 buy-in Casino Employees No-Limit Hold’em for almost two months of top-quality poker.