The Tribal Online Gaming Act (TOGA) of 2012 spells out the desires of tribal interests in regulated online gambling at the federal level. 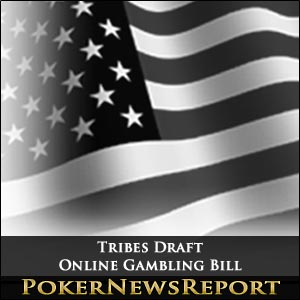 The Tribal Online Gaming Act (TOGA) of 2012 spells out the desires of tribal interests in regulated online gambling at the federal level.

Last week’s hearing before the U.S. Senate Committee on Indian Affairs that debated the “Regulation of Tribal Gaming: From Brick & Mortar to the Internet” revealed that Daniel Akaka (D-HI) has drafted a proposal that outlines exactly what tribal gaming interests are hoping to receive by way of federal online gambling legislation.

Although the bill in its current form has about as much chance of passing as Full Tilt players being fully reimbursed by the end of July, the drafted proposal is intended to further the dialogue with Tribes, said Akaka, as well as making sure that the unique circumstances surrounding tribal sovereignty are maintained in any legislation.

There are sure to be a multitiude of amendments and rewrites to the draft, but some of the issues that tribes would like included in any Internet gambling legislation include the establishment of an Office of Tribal Online Gaming, a requirement that players be 21 years of age and not 18 as is currently the minimum age being discussed for online gamblers, that tribes maintain a sovereign independence in the operation and taxation of online gaming, that individual tribes as well as a consortium be allowed to apply for licensing, and that an interstate framework be permitted excluding those states who wish to not take part.

Among the witnesses who testified at last week’s Senate pow-wow, a recurring theme was the need for federal online gambling legislation instead of the state-by-state mishmash that is currently in the making with Nevada leading the way in the absence of federal regulation. Perhaps the sentiment of those who prefer a federal legislative scheme was best expressed by Mohegan Tribe Chair Bruce “Two Dogs” Bozsum, who believes that state-by-state regulations will be “chaotic” and will fail miserably in protecting consumers or underage or problem gamblers, which is a huge concern. Federal regulators and tribes should work together to create a federal policy, Bozsum added.

As has often been the case, the tribes do not always agree on what is good for them as a whole. The National Indian Gaming Association (NIGA) was not entirely pleased with the first TOGA proposal. The current draft unfortunately falls short of meeting our principles, said NIGA Chairman Ernie Stevens, Jr., so we have work to do. No further Indian Affairs hearings or TOGA discussions have been scheduled, but some tribes have indicated a need for urgency on the issue in light of the many amendments expected to the bill.