California’s online poker bill is likely finished for 2012, as tribes and other gaming interests continue to lack common ground on the issue. 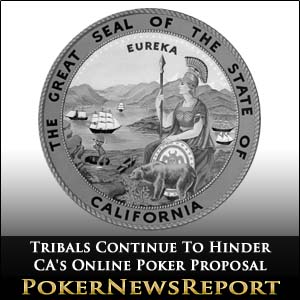 California’s online poker bill is likely finished for 2012, as tribes and other gaming interests continue to lack common ground on the issue.

With just a few days left in California’s legislative session, the state’s powerful Indian tribes still cannot agree on what is best for tribal factions as a whole in the online poker debate, causing the Pechanga Band of Luiseno Indians to withdraw from the California Nations Indian Gaming Association (CNIGA). Lack of unity among tribes is a key reason why the Golden State’s poker-only bill is languishing in the legislature as time runs out on this year’s session.

The Pechanga tribe is an influential player in California and their resignation was a huge blow to CNIGA and its credibility as a representative of tribes in the state. In a letter to the Pechangan nation, CNIGA Chairman Daniel J. Tucker expressed regret at the tribe’s decision to resign from the association and urges the tribal faction to reconsider for the sake of unity.

If history has taught us anything, it is that together, tribal governments can accomplish even the most daunting of tasks, Tucker wrote.

In addition to dissension among tribes, the California Online Poker Association (COPA) is still insisting on excluding the state’s horse-racing associations from participating in the license application process, which does not sit well with Sen. Roderick Wright, the bill’s co-author. COPA, which is a coalition of 29 tribes and 31 cardrooms throught the state, proposed a 75-page draft bill earlier this month in an effort to save SB 1463 from getting mucked for 2012, but it appears as though the online poker legislation will not come to fruition this year.

I believe SB 1463 is now likely unofficially dead, said Harsh Parikh, an attorney with Snell & Wilmer L.L.P., who is monitoring the bill’s progress for several clients.

California is the most-populated state in the nation and would be key in any interstate online poker model that may be adopted in the future. However, with continued lack of agreement among the Golden State’s tribes, cardrooms, and horse-racing interests, it looks as though the legislative process for the Internet poker bill will have to begin anew in 2013.

Going forward, it is important to remember that SB 1463 was introduced on the last possible day this year, Parikh said. It will likely be introduced earlier in the session next year and, because of the ‘urgency’ clause, the bill can be enacted as soon as it is passed.