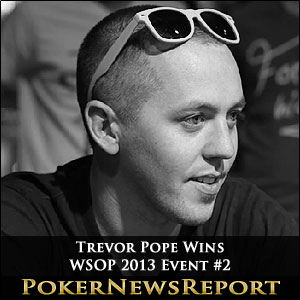 Pope had a huge chip lead going into the final table, with a stack of 3,420,000 chips or half of the overall chips in play. He had 2.8 million chips more than David Vamplew and Jared Hamby, who had the equal second highest chip stacks at the start of the day with 629,000 each.

He was also the person responsible for knocking out the bubble before the final table on Day 3, Rafal Michalowski, and he picked up where he left off on the fourth and final day of the event. Pope resumed his trait of knocking players out of the tournament by eliminating David Peters in eighth place, after hitting trip Queens on the flop.

The eventual winner would further cement his dominance in the tournament by eliminating Brandon Meyers in seventh place, after his Pocket Aces dominated Meyers’ Ace Queen. That elimination put Pope’s stack to just under four million as the event came down to its final six players.

Dan Kelly was eliminated in sixth place, also by Pope, in a hand that showed that sometimes luck can be cruel in the game of poker. Kelly called Pope’s three-bet before the flop with Pocket Aces, while Pope had a starting hand of Queen Seven off suit. The Ten of Spades, Six of Diamonds and Seven of Clubs on the flop gave Pope a pair but Kelly was still in the lead.

Kelly moved all in after the Ten of Diamonds came on the turn, a move that was instantly called by Pope. It looked like Kelly would significantly boost his chip stack as he had Pope soundly beaten, but the Seven of Diamonds on the river gave Pope three of a kind and Kelly was sent packing.

Pope was quiet for a short while after that, but he came back once again to eliminate the final three players in the event. Jared Hamby was the first of those three, being eliminated in fourth place at the hands of Pope. Hamby, who had Ace King, dominated Pope’s Ace Jack of Diamonds pre flop, but the Eight of Diamonds, Eight of Hearts and Five of Diamonds gave Pope a nut flush draw to keep him in the game.

The Nine of Diamonds on the turn gave Pope the flush he needed and Hamby was finished, with the Five of Hearts of river doing nothing to help his cause. Pope’s stack was boosted to a little less than six million by that point; a major fact given neither of the two remaining players had six figure stacks.

Darryll Fish was the next go – he was eliminated in third place after his Jack Eight was no match for Pope’s Pocket Nines. The Nines held after the board to give Pope the hand and an extra half a million chips before heads up play began between him and David Vamplew.

With 550,000 chips to his name going into heads-up play, Vamplew was at a significant disadvantage as Pope had a stack of 6,665,000 chips. While Vamplew was able to double up against Pope, it was not enough to mount a major offense as Pope eventually knocked him out in second place.

In the final hand of the tournament, Pope reraised Vamplew all in before the flop, which he called. Pope showed Pocket Fives while Vamplew was behind with Ace Six off suit, but had a number of outs to potentially keep him in the game. The Jack of Diamonds, Queen of Hearts and Jack of Clubs kept Pope’s hand dominant, as did the Seven of Clubs on the turn and the Four of Clubs on the river.

Vamplew was knocked out in second place and Trevor Pope was officially won the 2013 WSOP Event #2 and his first ever WSOP Gold Bracelet.