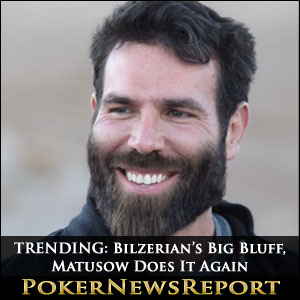 Dan Bilzerian is viral… again. No, this is not about his so-called arrest nor about another of his already notorious high style parties; this time we are talking about poker, a chapter of his life that generally flies under the radar.

Although Bilzerian stated many times that he made a fortune playing poker, he avoided sharing some specific insights about the high-stakes game he is actually playing. The same can be said about ‘Survivor’ Jean-Robert Bellande who took his bankroll from zero to a million, according to his Twitter account.

Not anymore though. In his latest tweet, Bilzerian gave us a sneak peek of what happened during a weekend session that also involved Bellande. The high roller tweeted yesterday:

Just bluffed @BrokeLivingJRB out of a half million dollars, I feel really bad about it though… pic.twitter.com/BFzBNXPEae

He might have felt bad for a moment, but overall, we can fairly assume that he was satisfied to say the least with his latest win of $500,000. Of course, the Las Vegas playboy didn’t revealed some other aspects of the game like his overall session earnings or who else was at that particular table. Why would he? Some things are better left unsaid.

PKR Poker pro Patty ‘babytes’ Beaumier has recently spoke to PokerStrategy.com about what it means to be a woman in a men’s game. Online, the gender or one’s appearance doesn’t mean much; online, it’s all about stats and betting patterns. Live though, it’s an entirely different story.

Beaumier admitted that she likes to play the role of the ditzy blonde on the live felt just to induce and make her opponents more predictable. The French starlet said:

I’m a woman and contrary to what one might think, this is a huge advantage at the table. I cannot count the number of times a player said ‘I played the hand that way because you’re a woman’

Did you hear that ladies? A very useful edge for anyone of you to use against men in the live games.

Beaumier also talked about her mindset and about what she considers to be the advantage of poker over other games:

You never reach perfection. It’s one of the charms of the game.

In spite of all these advantages, ‘babytes’ doesn’t plan to make a living out of playing the game. For her, poker is and will remain solely a hobby.

Remember what Mike ‘The Mouth’ Matusow said four years ago? About him playing 90% of hands in 2001 and raising 70% of the hands up to 2005? Poker has changed since 2005 and now Matusow is basically a nit.

But what if things would have remained the same with no internet poker whatsoever? The loud American said in the latest issue of UK‘s Poker Player Magazine:

If Internet poker had never happened, I’d have $20 million in the bank. I was the best player in the world

While Mason Malmuth agreed on the 2+2 forums Matusow was the better players of the big limit Hold’Em games at the Bellagio, it’s still a long way to being ‘the best in the world’. But that’s Mike being well… just Mike.

‘The Mouth’ also revealed some spicy things about his new life. He’s back grinding the mixed games at the Bellagio. Last year, he won $1.2 million but 2014 has been a downswing for him so far:

This year has been the worst year ever for me. Prior to this year, I’d had only one losing month playing poker. This year, so far, I’m a $300,000 loser.

Matusow didn’t miss the opportunity to denigrate the online poker environment in spite of being one of its promoters back when he was a Full Tilt pro. He said he had a $300,000 bankroll on FT when Black Friday occurred. Now, DOJ refuses to refund that sum stating he was a part of FT management.

Full Tilt destroyed my life, ‘The Mouth’ cried. He tried to absolve Chris Ferguson of guilt saying he is a good guy and he helped everyone. Not the same can be said about Howard Lederer:

I spent a year-and-half sticking up for Howard. Then I got sued for the fourth time because people believed I’m part of FT. It cost me $5,000 every time. So I called Howard and asked me to help me out. He told me he didn’t have the $5,000. I told him to take one of the mirrors off his car and give me the money. Then I hung up on him.

Way to take a stand, Mike!