Since the onset of this year’s WSOP at the Rio, cash-game volume on WSOP.com Nevada has soared. 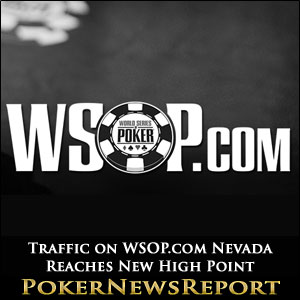 Since the onset of this year’s WSOP at the Rio, cash-game volume on WSOP.com Nevada has soared.

It’s been an exhilarating two weeks for WSOP.com Nevada, marked by unprecedented new highs and increased player awareness. Since May 20th average cash-game traffic on the Silver State’s iPoker market leader has ballooned from 97 to a projected 140. That’s good for a 44 percent increase.

But what’s particularly impressive about WSOP NV’s resurgence is that international online cash-game traffic suffered one of its worst weeks in recent memory, with volume dropping off over 4.4 percent from May 26 to June 2.

So how did WSOP NV manage to buck the global trend? The answer is not as obvious as it may at first seem.

While it’s easy to point the finger at the mere presence of the live WSOP as the primary factor contributing to its online counterpart’s success, it’s only one part of a cohesive whole.

WSOP.com has taken full advantage of its arrangement with tournament poker’s biggest annual event by launching a comprehensive cross-promotional campaign, the likes of which can be felt on both the virtual felt and throughout the Rio.

Unlike in years past, players at the Rio are permitted to play online poker while seated at live WSOP events. To facilitate the ease in which players can mix it up on the casino floor, the Rio has authorized cash deposits at the casino cage. Rounding things out are designated areas in the Convention Center where players can use their laptops to play online.

In addition, the entire establishment is adorned with WSOP.com logos, banners and other well-placed ads. WSOP.com has even taken the liberty of stamping its brand on featured tables. These logos are on full display during David Tuchman’s daily live final table streams. And Tuchman himself is known to throw in multiple WSOP.com plugs during his broadcasts.

Behind the scenes, WSOP.com is doing plenty to entice players to try their luck online. Right now, players can capitalize on a 100% match bonus up to $1,000, or one of many online satellites into live WSOP events. Buy-ins into sub-qualifiers start as low as $5.50.

Additionally, grinders who bust early from live events can take a second chance at glory by participating in the WSOP.com Online Championship Series. Spread out over 15 events, each event features a minimum $5k guarantee, with most events drawing prize pools in the $15k to $40k range. But that’s peanuts compared to this Sunday’s $530 buy-in, $100,000 event and next week’s $215 buy-in, $200k guaranteed Main Event.

Very. Traffic on WSOP NV has eclipsed that of its sister site in New Jersey, despite the Garden State boasting more than three times Nevada’s population. It’s also threatening to surpass PartyPoker NJ as the most heavily traversed network in the US regulated market.

Additionally, Online Championship events are drawing more players in Nevada than they are in NJ, despite the two states sharing the same schedule.

But perhaps most importantly is that more Nevada residents are aware that regulated poker exists than ever before. This bodes well for the long-term growth of WSOP.com, as without it traffic levels would likely stumble back to where they were prior to the live WSOP’s launch.