Julian Track leads the remaining eight players in the EPT Prague Main Event after it took just two levels of play on a whirlwind Day 5 to set the final table. 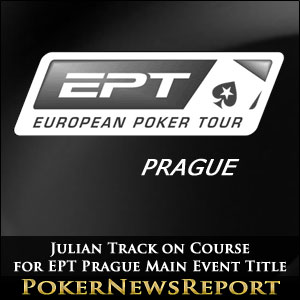 Julian Track leads the remaining eight players in the EPT Prague Main Event after it took just two levels of play on a whirlwind Day 5 to set the final table.

Twenty-two players returned to the Prague Hilton yesterday with just one goal in mind – to be in the final eight players that would contest the climax of the EPT Prague Main Event. In less than three hours fourteen players had busted, and German poker player Julian Track had emerged as the likely favourite to capture the €889,000 first prize.

Of course, favourites do not always win, and Track will be joined at the final table by compatriot Ole Schemion and three players from the UK – Max Silver, Stephen Chidwick and Ka Kwan Lau – who will be trying to prevent the top prizes heading back to Germany. Greek Georgios Sotiropoulos, Finn Jorma Nuutinen and Croatian Zdravko Duvnjak complete the final table on which the average chip stack is 94 big blinds – so a long final day is anticipated!

The action on Day 5 got off to an immediate start when Tomasz Kowalski moved all-in from the Big Blind for 740,000 chips with A♠ 4♣ and was called by pre-flop raiser Jorma Nuutinen with 8♦ 8♠. Topically – it being the week before Christmas – the “snowmen” held, and Kowalski was the first player to bust on Day 5 of the EPT Prague Main Event.

Pocket Eights were also the reason for the demise of Lasell King, after he moved all-in with pocket Jacks and received a call from Ori Hasson (8♠ 8♣). Hasson´s snowmen improved to Quads on the flop and King was out in twenty-first place – shortly to be followed by Romain Chauvassagne; who had risked the last of his chips with suited connectors (8♥ 9♥) but failed to connect with the board and fell in twentieth place to Ole Schemion´s A♥ J♣.

Silver Forges Ahead and Chidwick has the Fours Within Him

Overnight chip leader Max Silver enjoyed a little good fortune on his way to being the first player to accrue 5 million chips – rivering the A♥ to complete a straight and eliminate Tamer Kamel 10♦ Q♠ > K♠ J♥ after Kamel had flopped two pairs – and Stephen Chidwick also improved his position amongst the leaders by busting Ihar Soika in eighteenth place 4♠ 4♦ (half snowmen?) > A♦ K♣.

The tournament was reduced to two eight-handed tables when Max Silver accounted for Artem Metalidi 10♥ 10♠ > K♦ Q♣, but as Level 26 started (blinds 20,000/40,000 – ante 5,000) the pace of eliminations only got quicker. Tapio Vihakas tried to bluff Ole Schemion out of a 400,000 chip pot and left the tournament in sixteenth (A♥ Q♥ > 5♦ 7♦) and Eureka Prague Main Event winner Dmitri Holdeew finished the EPT Prague in fifteenth when Stephen Chidwick paired his Queen on the flop to bust Holdeew Q♣ J♣ > A♦ 8♦.

Stephen Chidwick moved closer to Max Silver in the chip counts when busting Nikita Nikolaev in thirteenth A♣ 9♣ > A♦ 3♥, but Julian Stack leap-frogged everybody after a sensational hand against Ori Hasson. Hasson had chipped up to just short of four million chips in a big pot against Zdravko Duvnjak, but found most of them going into a massive pot against Julian Track after some formidable pre-flop action. Hasson rolled over A♣ Q♦ (Doh!) and would have to connect with the board to improve past Julian Track´s 10♠ 10♣.

Hasson missed the flop of 9♦ 9♣ 6♦, and the board completed 9♠ / 6♣ to make a communal Full House; however Track´s pocket Tens gave him the better Full House and Hasson was reduced to his last 550,000 chips. Those chips went all-in with A♣ 10♣ against Ka Kwan Lau´s A♦ A♠ to send with to the rail in twelfth place, shortly after Andrew Chen (A♠ J♠) had been bust out in thirteenth by Georgios Sotiropoulos (8♠ 8♣) – Sotiropoulos´ snowmen improving to a set on the flop.

Stephen Chidwick has a knack of overcoming the laws of poker nature, and he did it again yesterday when Erwann Pecheux moved all-in with A♥ K♥ and Chidwick (who had Pecheux comfortably covered) made the call with A♣ Q♣}. Pecheux was a 70% favourite to win the hand and double-up, but the board ran 10♠ Q♥ A♦ / 7♠ / Q♦ to give Chidwick a Full House and move him up into third place on the EPT Prague Main Event leaderboard behind Track and Silver.

The final two eliminations of Day 5 also happened in quick succession when the two shortest-stacked players lost their tournament lives. Radek Stockner (Q♦ 5♣) missed the board completely to be eliminated in tenth place by Zdravko Duvnjak (A♣ 8♠), and Sigurd Eskeland (K♦ 6♦) fell into a trap laid by Georgios Sotiropoulos (7♥ 7♣) after the flop and Turn of J♦ A♠ 7♦ / K♥, and was eliminated in ninth place when a diamond failed to spike on the River.

Looking Ahead to the EPT Prague Final Table

When the final eight players take their seats at the Prague Hilton this afternoon, there will still be a few hands left in Level 26 before the blinds increase to 25,000/50,000 (ante 5,000). An interesting final table draw has given Julian Track position on Ole Schemion, while Stephen Chidwick will have position on Max Silver. It promises to be a fascinating conclusion to the EPT Prague Main Event.