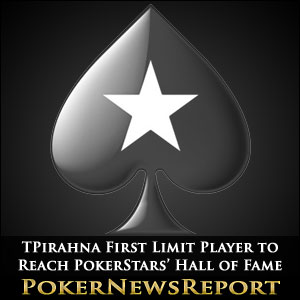 Anthony Pirone just accomplished the impossible – in only four-and-a-half year’s time, he accumulated 5 million VPPs. His amazing feat is made all the more shocking when one considers that he did it primarily playing middling limit games.

As revealed on his blog, Pirone is a mid-stakes limit grinder who spends most of his time at the $15/$30 and $30/$60 tables. To date, he has played nearly 3 million hands, has contributed a staggering $965k in rake and even more impressively, has profited nearly $2 million. Over the course of his journey, he acquired approximately 1.7 VPPs per hand.

TPirahna joins a notable list of players who have earned over 5 million VPPs including Bertrand “Elky” Gospellier, Randy Lew and legend George “Jorj95” Lind, who is the first and only player to achieve 10 million VPPs. “Elky” was the first player ever to become a SuperNova Elite, achieving that status a mere 4.5 months after he started playing. He is also the current world record holder for SNGs played in one hour (62).

Achieving SuperNova Elite status on PokerStars is no small feat. In order to do so, a player must amass 1,000,000 VIP points within a year’s time. The majority of VPPs are acquired by playing ring games. The bigger the game, the more VPPs there are to be earned.

Getting inducted into the Hall of Fame is even tougher, as it requires a player to achieve the equivalent of SuperNova Elite five times over.

PokerStars works on the contributed rake system, meaning that players cannot simply rest on their laurels waiting for premium hands. The site also rewards VPPs for paying tournament entry fees, although unless players partake in hundreds of SNGs and MTTs a day, they’ll have little chance of becoming a SuperNova Elite.

For his accomplishment, Pirone will receive a myriad of rewards and prizes including a TAG Heuer watch, direct support with a PokerStars veteran via instant messenger and enshrinement into the Hall of Fame. SuperNova Elites also gain free entry into the WCOOP Main Event and are rewarded with upwards of $43,000 in rakeback.