Tower Gaming, which operates Tower Poker in addition to casino and sportsbook services, is saying good-bye to the Ongame Network and moving to the Cake Network. 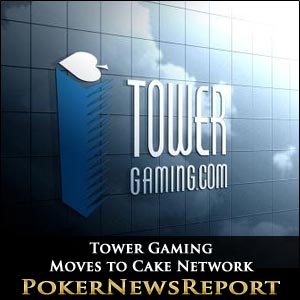 Tower Gaming, which operates Tower Poker in addition to casino and sportsbook services, is saying good-bye to the Ongame Network and moving to the Cake Network.

Tower became popular on Ongame with players who wanted high rewards. They were one of the first Ongame sites to offer unlimited reload bonuses. Players going to Cake from Tower Gaming will get 33% rakeback, which is the maximum for the network, in addition to standard Cake Poker promotions such as Gold Chips and Loyalty Levels. Despite moving to a network that currently allows U.S. players, Tower Gaming won’t be accepting new U.S. player sign-ups at this time.

Industry insiders believe that the reason for the network shift is because Tower’s marketing strategy no longer coincides with the Ongame Network’s plan to attract and encourage recreational and casual poker players.

In promoting the move, Tower Gaming is offering rakeback that is based on the dealt method, believed to be the rakeback method most favorable to players. Also promised in the switch are more payment options and choices of currency, which Tower claims will afford players easier, faster and much more convenient cashouts. Tower Gaming, it is assumed, will handle their own processing of payments.

Transferred players will have to download the Cake software, but can continue to log on using their same user name and password. Because many Tower players were there for the high rewards and good deals, many may have chosen Tower Gaming for the very reason that it was part of the Ongame Network. A portion of those players may be unwilling to transfer to Cake.

Despite Cake Poker being a U.S.-friendly poker site, Ongame has four times more ring game players than Cake. Ongame is ranked in 5th place in overall traffic. Players on Cake, which is currently ranked 21st in network traffic, are expected to welcome the inevitable boost in traffic that the move will provide. Cake Network has seen a decline in player traffic in the last few months, rumored to be due to very slow withdrawal processing and the fear of another shutdown of poker sites that still permit U.S. players.