UK poker players are asking the UK Gambling Commission to reconsider a rule which prevents the auto top-up of their chip stacks during cash games of poker. 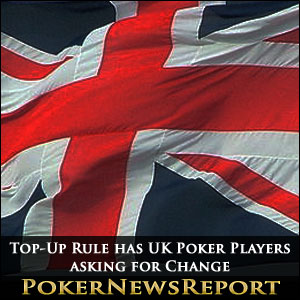 UK poker players are asking the UK Gambling Commission to reconsider a rule which prevents the auto top-up of their chip stacks during cash games of poker.

Next Wednesday the UK´s Gambling (Licensing and Advertising) Act comes into force and with it some changes to how online poker is regulated in the UK. The aim of the new regulations is to provide greater protection for online gamblers in the UK and to tax offshore providers of remote gambling at the same rate as those which are located in the UK.

Many of the regulations relating to the protection of UK players have received universal approval – for example the segregation of player funds – but one rule in particular has raised claims that it puts poker players in the UK at a disadvantage against players from the rest of the world.

The amount of funds taken into a product should not be topped up without the customer choosing to do so on each occasion e.g. when a customer buys-in at a poker table they should have to choose to purchase more chips to play at the table – automatic re-buys should not be provided.

The primary issue with RTS § 14 (i) is that having to manually add chips to a cash game table will slow the table down and, when a player is multi-tabling, slow down all the tables he or she is playing on. It might also be the case that a manual top-up is missed – in which case a player is betting to one particular strategy mistakenly – giving an advantage to players from overseas who can avail of the auto top-up feature.

In respect of multitable re-buy tournaments, the advantage that overseas players have is not so obvious but is important nonetheless. When players from the UK have to manually re-buy into the multitable tournaments, the time delay between the automated operation and manual operation allows more hands to be played on tables containing non-UK players. The discrepancy may only be a few seconds, but over a period of time those seconds add up.

Proposed Action regarding RTS § 14A (i)

The issues were first brought up after PokerStars revealed the migration process to the new UK platform and mentioned in their Q&A that due to UK regulations, the auto-rebuy function for ring games and tournaments will no longer be available. This prompted one UK poker player to head to the popular 2+2 poker forum and suggest that a petition be started to suspend RTS 14A (i) or at least reconsider it.

There is a precedent for remote technical standards to be withdrawn or changed. RTS 8 – a standard limiting the number of auto-plays that a customer can pre-load into an online slot machine – has already been pulled for reconsideration by the UK Gambling Commission, and the author of the proposed petition on 2+2 “Richas” concludes his request for RTS § 14A (i) to be reconsidered by stating:

Once fully consulted upon we are sure that the evidence will show that automated top ups and rebuys in poker do not encourage problem gambling, escalating stakes or loss of control.

We suggest that any UK poker player concerned about the top-up/re-buy issues head over to 2+2 and contribute to the growing thread.