A major controversy has erupted during the World Poker Tour Championship’s $25,000 buy-in event with an alleged cheat, German Ali Tekintamgac, being allowed to take part at The Bellagio in Las Vegas – angering many of the world’s leading players. 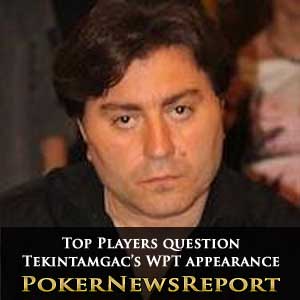 A major controversy has erupted during the World Poker Tour Championship’s $25,000 buy-in event with an alleged cheat, German Ali Tekintamgac, being allowed to take part at The Bellagio in Las Vegas – angering many of the world’s leading players.

The biggest tournament in the WPT schedule has attracted a massive field, but all the talk has been about Ali Tekintamgac’s appearance following his disqualification from the main event of the Partouche Poker Tour (PPT) in Cannes, France, last November.

Tekintamgac, who topped last May’s Spanish Championship in Barcelona to secure a place at the WPT Championship, was barred from joining the other eight players for the Partouche final table in the Palm Beach Casino on the French Riviera in November.

Tournament organizers concluded – using video evidence from qualifying in September – that the German had employed phony media members and bloggers to supply signals relating to his opponents’ hole cards.

That investigation was prompted by European players questioning Tekintamgac’s earlier appearance at the European Poker Tour (EPT) stop in Tallinn last August, when he allegedly employed similar tactics in the Estonian capital to finish 36th.

Fast forward to the second day of the WPT Championship yesterday and Tekintamgac is seated and ready to play – much to the surprise of countless poker players, including Daniel Negreanu, Scott Siever and Vanessa Selbst.

With Tekintamgac having been branded a cheat by PPT organizers, players such as American Selbst – a World Series of Poker bracelet winner in the $1,500 Pot-Limit Omaha event in 2008 – found it hard to believe that the WPT had accepted his participation in Las Vegas.

Selbst, although not in Vegas, used social networking site Twitter to question the WPT’s reasons for allowing Tekintamgac to take his place at such a prestigious event.

The 26-year-old Selbst – who did play the Partouche final table – was shocked to hear that Tekintamgac’s registration has been accepted by the WPT.

In a question aimed at Matt Savage, the WPT executive tournament director, Selbst wrote: “is Ali Tekimtamgac really playing this tournament?” and “why was he even allowed to register???”. So far there has been no response from Savage.

However, the most obviously angered player is Canadian superstar Negreanu. The 36-year-old – a four-time WSOP bracelet winner and two-time WPT Championship victor – challenged Tekintamgac as the German took his seat for the event, but was cautioned about his conduct by Bellagio’s security.

Negreanu did, though, state on his Twitter account, via three tweets, that he was surprised to see Tekintamgac at the event.

He wrote: “Ali Tekintamgac who was caught cheating in Partouche is in #WPTChamp I called him out, and floor told ME I can’t do that! When will we learn”.

That first tweet was followed by: “Bellagio/WPT should absolutely not allow this person in the event. He was caught red handed cheating and should be banned. This is absurd”.

Finally, in reaction to an alleged threat from Tekintamgac aimed at Siever, Negreanu wrote: “The cheater just threatened Scott Siever the floor was alerted and won’t do anything about it. Physical threat, he should call the cops.”

Negreanu’s final tweet on the subject was in relation to an incident when Siever, who was seated at the same table as Tekintamgac in The Bellagio, confronted the German over his exclusion from the Partouc­he final table.

Tekintamgac, who has denied all allegations and is poised to sue the PPT, made it to the WPT Championship’s third day with a close-to-average stack.

It will be interesting to see how other big-name pros react to having him seated at their table.