Professional poker player and businessman Tony G has announced that he will be running for a seat in the European Parliament next year. 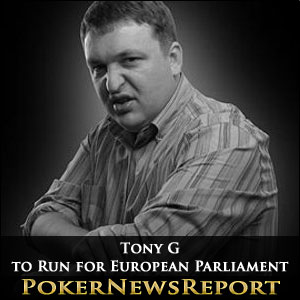 Professional poker player and businessman Tony G has announced that he will be running for a seat in the European Parliament next year.

The Lithuanian-Australian, whose real name is Antanas Guoga, will be running as a Liberal Party candidate and is the second candidate on the list of that party. That party currently only has one representative in the European Parliament, but it has a goal to increase that to at least two when the next parliamentary elections are held.

G said that he was motivated to help make a difference at the political level and that his diverse personal and professional background helped would help make him an ideal member of Europe’s parliament.

I believe that Lithuanian politics needs new people and new blood and I want to be in a position to change policy and I qualify as ‘new blood’, he wrote. I have been fortunate enough to be reasonably successful in my life and I have new ideas and hope to inspire others to come into politics too. I think I can bring a lot to the table with my experience in life and business.

He also conceded that being elected to the parliament would not be an easy task, but also said that he would do whatever it takes to put himself in a position to win the coveted seat.

The road ahead is filled with a lot of hard work for me. But I am qualified and up to the task. My goals are set, he said.

Tony G has been a major figure in professional poker for nearly two decades, and his accomplishments on and off the table are reflective of that.

In the business world, Tony G is also the owner of a number of high profile websites related to poker and has been a major sponsor of the Lithuanian Basketball Federation for a number of years.