PokerStars have announced yet another signing to add to their Team PokerStars Pro roster. The latest person to join the worlds largest online poker site is Antoanell Judet, or ‘Toni’ Judet as he is more commonly known as. Judet is an… 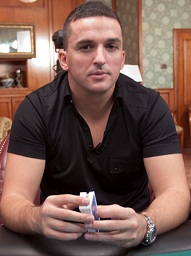 PokerStars have announced yet another signing to add to their Team PokerStars Pro roster. The latest person to join the worlds largest online poker site is Antoanell Judet, or ‘Toni’ Judet as he is more commonly known as. Judet is an International billiards/pool champion from Romania who began playing poker five years ago and is currently considered to be one of the best Romanian poker players with $761,277 in live tournament earnings, making him second on the Romanian all-time money list.

Judet will now represent PokerStars in live poker tournaments across the world, especially at the European Poker Tour where he has found great success, and of course he will also be playing on PokerStars.

It has been quite a week for poker rooms signing players. The biggest signings were announced by Full Tilt Poker who have signed professional tennis player James Blake and heavyweight boxer Audley Harrison. Blake turned pro in 1999 and since then he has won 15 career titles and is considered one of the top tennis players in the world and he finished second in Season 2 of Bravo’s Celebrity Poker Showdown. Meanwhile Harrison has had 31 professional fights and won 27 of them, and has one of the most anticipated heavyweight boxing fights in history coming up against David Haye who is the current world champion. Harrison has had a few good results in live poker tournaments and even online, and already he has set his sights on winning the Full Tilt $750k Guarantee or the $1 Million Guarantee within the next 12 months.

PokerStars also announced the signing of Maxim Lykov who is one of the best Russian poker players, ninth on the all-time Russian money list in fact. Lykov has ammassed $944,804 in live tournament winnings and he has won quite a lot online too – all from only two deposits of $40.

And finally 3D poker site PKR.com have announced the signing of Scott Shelley who won Event 3 of the 2010 World Series of Poker Europe, defeating J.P Kelly heads-up for his first bracelet and a payday of £133,857. The 24-year old was no stranger to PKR prior to the win however, he worked for the site as a customer support agent.

Stay tuned to PokerNewsReport.com for the latest poker news.