Toni Judet in Control of EPT Loutraki Heading into Day 3 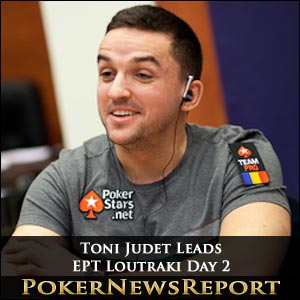 The Team PokerStars Pro had started Day 2 in second place on 143,500 chips, behind Germany’s Mario Puccini, but enjoyed a storming session to move clear at the top of the leaderboard.

Judet had, however, reached almost 350,000 in chips about an hour before play ended when he snaffled much of Dutchman Pim van Riet’s stack.

However, Judet was not willing to give up this hand and re-raised to 26,100, with van Riet calling.

Both checked when the turn revealed the 9d, before Judet opened with 41,500 on the K♠ river. That bet was all too much for van Riet and he folded as Judet moved way ahead of his opponents on the leaderboard.

But Judet was brought closer to the pack before the chips were counted at the end of the day, although he still holds a healthy lead over Grudev.

Probably the most thrilling table for railbirds was the one that included players such as Rupert Elder, Salman Behbehani, Heinz Kamutzki, Team PokerStars pro Jude Ainsworth, McLean Karr and Kenny Hallaert.

This was table 19 and all six players went at it from the start of Day 2, resulting in the elimination of Behbehani, Kamutzki and Hallaert by the time it was broken up following just a few levels of play.

However, Ainsworth and Karr had slowly but surely built up the chips stacks, before joining the likes of Jan Bendick and Roberto Romanello at another table.

Incredibly, Tom Marchese – who had secured his seat at the event via an online qualifier – was still in the tournament despite being unable to appear. Of course, he was eventually blinded away, but not before outlasting more than half the field.

Less than one hour before the close, Karr, in the big blind and down to his last 15,500 chips, was faced with a momentous decision to call his stack after Ainsworth, on the button, had bet into the pot after the action had folded in front of him.

The leading Greek player is Charalampos Kapernopoylos, who will start Day 3 is 10th place on 174,900.

Do you want to make a couple of million? Check our Poker News Report $10 Million PokerStars Satellite here.