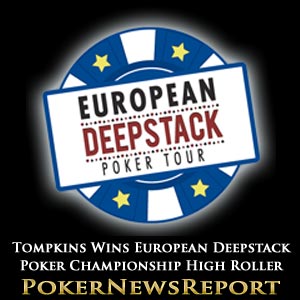 Jason Tompkins – the runner-up for $64,713 at the €1,500 buy-in No-Limit Hold’em main event in Dublin at the European Deepstack Poker Tour (EDSPT) II in February of 2009 – outlasted 18 other players in the €2,500 buy-in No-Limit Hold’em high roller to take the title after defeating fellow Irishman Tim Farrelly in their heads-up fight that left the latter with €11,670 for his runner-up spot.

Fourth place, for €4,755, went to another Englishman, Andrew Hulme, who saw his A-J beaten by Dubliner Farrelly’s A-Q.

Yet another Englishman hit the rail in third place, for €7,350, when Londoner Max Silver – the United Kingdom and Ireland Poker Tour (UKIPT) champion from the 2010 Dublin stop – moved all-in with K-2 against the pocket 10s of Tompkins.

The hand was pretty well over – as was Silver’s competition – when County Kildare pro Tompkins found a 10 on the flop for trips.

That left us with just Tompkins and Farrelly in the all-Ireland heads-up that took just 10 minutes for a champion to be decided.

Tompkins was once more all-in with 10s to find himself ahead of the A-8 held by Farrelly. The board once again favoured the former and that was that for the event.

Main Event Up and Running

Meanwhile, the €550 buy-in main event, which kicked off yesterday, won’t finish until Sunday evening, when all Day 4 starters will aim to emulate Magnus Nasslin’s victory from 2011 that netted the Swede €70,000 ($95,491) from a 737-strong line-up last February.

A €550 buy-in Omaha 8 Max Triple Chance event begins on Saturday, while there are also two No-Limit Hold’em tournaments – with buy-ins of €330 and €200 – to be played out from Saturday and Sunday respectively.

No matter who wins these tournaments, they won’t have to long to wait for the sixth season of the EDSPT as the Czech Deepstack Poker Championship pulls into Prague from March 21 to 25 as the first leg of the new series.

The dates and location for next year’s Irish Deepstack Poker Championships have still to be announced, however.