Vedes has pocketed $779,520 by showing an amazing ability to remain calm under pressure to take down the World Poker Tour (WPT) Seminole Hard Rock Showdown. 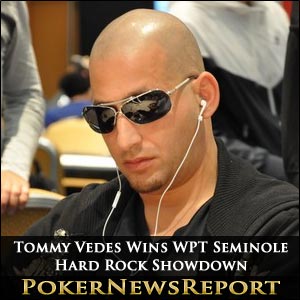 New York State’s Vedes also managed to make the final table last year, but – despite starting as chip leader – could only finish in sixth place for $166,272 as fellow American Taylor von Kriegenbergh picked up $1,122,340 for the win.

The 40-year-old will no doubt be delighted to lay those ghosts to rest with this fantastic victory that emulated Scotty Nguyen’s amazing feat of finishing sixth one year to return with victory the next – particularly as he had started the six-handed final table as a massive underdog and short stack when holding just 25 big blinds.

Starting Numbers Way Down On 2011

But it cannot have gone unnoticed that this year’s field showed a dramatic drop in numbers from last year’s inaugural staging of the tournament, when 433 players signed up. That’s a massive 33% drop on 2011, which must be worrying for organisers. It does appear that they will address this problem for next year, though, with the buy-in likely to be lowered.

However, none of that will be of too much concern to Vedes after he ultimately beat out the challenge of Florida’s John Dolan – who took home $1,772,959 for finishing sixth at the 2010 World Series of Poker (WSOP) main event – once the tournament had become two-handed.

Dolan began the heads-up clash way in front of Vedes in chips, with the former holding 6.3 million against the latter’s 2,535,000, once the overwhelming start-of-day chip leader, Serock, had been sent to the rail in third place for $306,240 by the eventual runner-up.

Dolan took about two minutes before reaching a decision, before them shoving all-in. Vedes snap-called to show A♦ 10♦ for a huge lead over the K♦ 6♦ of Dolan.

However, the K♥ J♣ 6♥ flop gave Dolan the lead with two pair, while Vedes – although disappointed – still had outs with a gutshot straight draw now on. The Q♠ turn shocked the gathered railbirds as Vedes did pick up that ace-high straight, leaving Dolan now needing a six or a king for a full house to stay in contention for the title.

But the 4♣ river was just what Vedes wanted to see as he took the title to leave Dolan as runner-up, but still $459,360 richer.

Bowker regained some ground when tripling-up and then doubling-up, but could not sustain his comeback to eventually exit in sixth place for $122,496 during the next level at the hands of New Mexico’s Serock.

In the cut-off seat, Bowker moved all-in with Q♣ J♠ for his last 255,000, with small blind Serock making the call while holding A♦ J♦ for the pre-flop lead. The board ran out 7♦ 6♣ 3♠ 9♣ 5♠, giving Serock the pot with his ace kicker and eliminating Bowker in the process.

But it was Vedes who scored the next knockout when sending Florida’s Sharon Levin to the rail in fifth place for $158,688 just four hands later.

Levin revealed his hole cards, A♥ 3♣, to leave him needing to improve to avoid the knockout. However, no cards could help the WPT Seminole Lucky Hearts fourth place finisher from February on a K♦ J♦ 6♠ 2♥ 9♠ board as Vedes picked up a set for the elimination and a move up to second in chips.

Serock, who now knew he would claim his place atop the WPT Player of the Year leaderboard following Levin’s exit, moved further ahead in that particular race when Bergeron hit the rail in fourth place for $212,976 when open-shoving his pocket sixes against the queens of Vedes.

Craig Bergeron Out in Fourth Spot

The blinds folded, leaving Bergeron to contemplate his decision when revealing 6♥ 6♠ against Vedes’ dominating Q♥ Q♠. The board came K♠ 8♥ 7♠ 8♠ 9♣, so meaning Vedes’ queens held for a knockout that took him into second place in chips with 2,385,000 – now less than half of Serock’s 4.5 million stack.

Now three-handed, Dolan then double-up through Serock when the latter four-bet all-in with pocket sixes, to be met by a call from the former, who showed A♦ J♠ for a race. A jack arrived on the flop to give Dolan top pair that also saw him take a massive chip lead as Serock now dropped to nearly level with Vedes.

Dolan showed K♦ 8♣ for eights and threes, but was still behind Serock, who now looked favourite to double-up. However, the K♠ turn gave Dolan a better two pair, kings and eights, leaving the one-time huge chip leader just two outs from elimination. The 9♦ river sealed Serock’s fate as Dolan took 6.3 million chips into his heads-up clash with Vedes, who had 2,535,000.

Their head-to-head encounter would last 39 hands, before Vedes – who certainly appeared to be a man on a mission – had all the chips in play to be crowned champion.

Vedes initially made little headway in the battle, but soon gained some momentum when flopping a flush to double-up against the top pair of Dolan.

The eventual champion scored another double-up not long after when both found top pair on the flop, only for Vedes’ bigger kicker to final take him into the chip lead for the first time.

Vedes never relinquished that lead, taking down the final pot just seven hands later to immediately pop the cork on come champagne as his celebrations began.

The list of fallers outside the money is quite incredible, with the likes of Eli Elezra, Tony Dunst, former Full Tilt Pros Michael ‘The Grinder’ Mizrachi and James ‘Flushy’ Dempsey, Daryll Fish, Abe Mosseri, Tom Marchese and Josh Arieh hitting the rail on Day 1.

The WPT now heads to Jacksonville for the BestBet Open on Friday for six days of action until next Wednesday, when the $5,000 buy-in main event draws to a conclusion.