Tommy Vedes made impressive strides in pursuit of a second World Poker Tour title, but could not overtake the chip stack of Day 1A chip leader, Fabien Satoris. 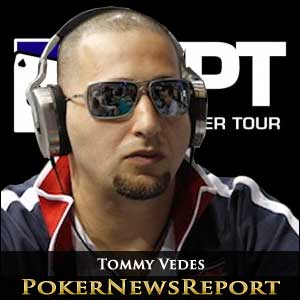 Tommy Vedes, winner of the WPT Festa al Lago Las Vegas in 2009, made impressive strides in pursuit of a second World Poker Tour title in Malta yesterday, but could not overtake the chip stack of Day 1A chip leader, Fabien Satoris.

Tommy Vedes, from New York, is one of the many American players currently touring Europe to acclimatise themselves for the WSOP Europe next month, and he has already picked up a decent cash in a Partouche Poker Tour side event to add to previous international cashes in Cyprus, Monte Carlo and the UK.

Vedes started his ascent to the top of the Day 1B leaderboard during level 2. Holding 7♥ 4♥, he raised Ivan Freitez´s (A♦ K♦) bet of 750 chips to 1,650 on a flop of K♥ 8♠ 5♥, and then bet a further 3,100 after the turn of 4♦. Freitez called, and called again when Vedes bet 7,100 after the 6♦ river. Even the dealer was surprised at Vedes inside draw and started to push the chips in the direction of Freitez, before the losing player pointed out the right direction in which they should be headed.

The Re-Entry Format has Limited Success

The format of this WPT Main Event – where players who busted out on Day 1A could buy back in on Day 1B – had a limited amount of success. It certainly attracted a bigger Day 1A field, and some of those who paid twice to enter the event made it through to Day 2 – amongst them UK poker player John Eames. However, the re-entry was not such a good idea for Fabrice Soulier and McLean Karr, who effectively paid €6,600 to spend the weekend on the beach.

Phil Hellmuth Arrives Late But Gets to Close of Play

Following Tuesday´s spectacular “fail” by Phil Hellmuth, in which he turned up with just two levels to play and busted out on a bluff within 14 minutes, the millionaire poker star left his entrance even later on Day 1B – arriving with just one level left in the day. Fortunately somebody had the foresight to seat him on a table alongside Claire Renaut, Sofia Lovgren and Kara Scott, so Hellmuth had something to distract him from the monotony of playing poker and he managed to survive into Day 2 this time.

Including re-entries, a total of 240 players took their places over the two days at the Portomaso Casino, making a total prize pool of €720,000. 154 players remain in Day 2 including UK PKR pro James Sudworth, who doubled up early in the day with a set of Jacks and finished the day in seventh place overall with 102,750 chips. Joining him will be Dusk till Dawn´s Simon Trumper, but sadly, there will be no seat on Day 2 for James Akenhead or UK Poker Personality of the Year Kara Scott – both of whom busted out in the final hands of the day.