Tommy Bingham claimed the Dusk till Dawn Grand Prix IV title in an astonishing conclusion to the tournament in which an eight-way split was agreed on the final table. 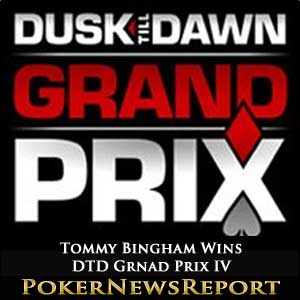 Tommy Bingham claimed the Dusk till Dawn Grand Prix IV title in an astonishing conclusion to the tournament in which an eight-way split was agreed on the final table.

Tommy (€27,900) actually received less in the deal than second place finisher Nicholas Humphris (€30,000), but stated that he was delighted with the result following his €60.00 online qualification.

Players in a Hurry to Bust Out

104 Players had survived Day 2 from the original 399 players who had either “qualified” online or live at Dusk till Dawn, with Mark Wates (191,600 chips) leading the way in a tight field averaging more than 60,000 chips and blinds at 1,200/2,400 (ante 300). Everybody who had made it through to Day 3 was guaranteed a cash of at least €425.00, but with the unique payout structure making it more lucrative to finish in the top 18, many players busted out early trying to increase their overnight status.

Within two hours, the field was reduced to half, with the biggest profiteers being Nicholas Humphris – when his 3♥ 2♥ found two pairs on the flop and sent Keith Johnson to the rail – and Mohammed Ashfaq -his A♣ 8♦ proving too good for Karl Prescott´s K♦ 10♠ on a board which ran A♥ 9♣ 6♥ / 8♠ / 10♥. Latvian poker player, Romans Mihailovs, also benefitted from players falling on their own swords – besting Dipesh Mistry´s short-stacked K♠ 7♠ shove with J♥ J♦.

As the big payout “jump” got closer, play starts to tighten up. Tommy Bingham was the big gainer in this session, taking out Dave Griffiths with A♣ 10♥ v Q♠ 8♥ and Steve Jelinek with 2♦ 2♣ v Jelinek´s A♦ 10♦. He then crippled earlier chip leader David Burn with Q♠ Q♦ against Burn´s A♥ 5♥ and, as the final table approached, had a commanding chip advantage of more than a million chips against his closest rival.

That was shortly to change when Christopher Murtagh lost a pot approaching a million chips to Nicholas Humpris – Humphris´ A♠ K♣ besting Murtagh´s A♥ Q♦ and the stage was set for an extraordinary split which resulted in the chip leader receiving a smaller prize than the second placed player and fifth place Ian Turner receiving less than the sixth placed Mohammed Ashfaq.

How the Split was Organised

Tommy had originally asked for a split of €25K for he and Humphris, with the remainder of the prize money split equally between the remaining six players. Humphris argued that he wanted at least €30K and Mihailovs, Arkadiou and Ashfaq agreed on the basis that they received more than the shortest stacked players.

Ian Turner (5th in chips) and Michael Daryl Haney (8th in chips) had already won a bonus €15,000 through Dusk till Dawn´s Golden Chip promotion because they had made it to the final table, and with the one remaining player, Mark Wates, benefitting by more than €5,000 in the deal, the split was agreed – although Tommy Bingham had to shave his €30K in order to balance up the prize money.