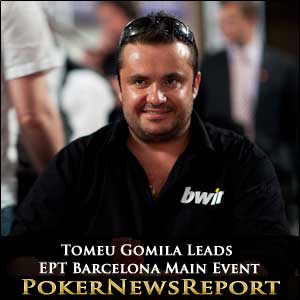 As predicted yesterday, the early action was a little more subdued than the “Battle of Barcelona” we had witnessed on the opening days of the event. 141 players took their seats in the Gran Casino aiming, initially at least, to be within the 120 player bubble that would leave with a cheque of at least €8,000 in their pockets. It took more than two hours for the bubble to eventually burst, with Jeffrey Hakim being the unlucky player – his A♥ J♠ getting rolled over by Mario Adinolfi´s 8♠ 4♦ when the 8 paired on the flop.

Raul Mestre had been battling with Marcos Fernandez for much of the day to capture top spot in the chip lead. Responsible for a series of knockout blows, the Spaniards were seated at separate tables but keeping a firm eye on each other. It was only when Mestre crushed WSOP bracelet winner Sigurd Eskeland late in the day in an A♦ Q♥ versus 10♣ J♠ race that Mestre surged ahead, but even his substantial chip stack could not compete with that of Tomeu Gomila after Gomila took the biggest pot of the tournament.

Gomila was seated on the button and had bet into small blind Jose Angel Latorre Marina and big blind Simon Charette. Latorre Marina shoved straight in for 600,000 and Charette had the clock quickly called on him by Gomila in an act of gamesmanship. Under pressure to act, Charette also shoved his remaining 680,000 chips into the middle and both blinds were snapped called by Gomila.

There was no hope for either of the blinds in the cards as the board ran 4♠ J♥ A♠ / 4♣ / 3♠ and both players were sent to the rail with Gomila collecting a huge pot of 2.3 million chips, catapulting him into the chip lead above Raul Mestre.

After reporting yesterday that Chris Moorman, Vanessa Selbst, Guilluame Darcourt and Martin Schleich were all running smoothly, Chris Moorman busted out before the bubble when his Q♠ J♦ shove was called by Mario Adinolfi ´s A♠ 9♦ which paired an Ace on the flop. Vanessa Selbst at least got into the money in 84th, and she was unluckily eliminated when her AK shove was called by Juan Azon’s AJ who caught the Jack he needed on the flop, and the pink-haired Guillaume Darcourt left in 46th – disbelieving the hand which knocked him out. Lock Poker Pro team member Leo Margets left in 36th.

Raising from mid-position with 4♦ 4♥, Darcourt was put all-in by the Czech Dmitrij Fadeev holding A♣ K♦. The flop of 6♥ 8♥ J♥ posed no threat to the Frenchman´s pair, nor did the 8♦ on the turn. However, the J♦ on the river gave both players two pairs (Jacks and Eights) and Fadeev´s Ace kicker sent a visibly shaken Darcourt to the rail. Fadeev was himself cruelly busted out by Day 2 chip leader Xavier Carruggi, when Fadeev (A♣ Q♦) got all-in on a flop of 5♦ 8♣ Q♣ against Carruggi´s K♣ 9♣. The 9♠ on the turn and K♥ on the river gave Carruggi a runner-runner two pairs, and Fadeev also left the table shaking his head.

The Poker Equivalent of the Grim Reaper

Other players mentioned in our report yesterday included Brazilian PokerStars pro Andre Akkari who finished the game in 61st position, Marbella Mob member Nigel Goldman who busted in 66th, US PokerStars Team pro player Victor Ramdin (out in 74th), Sam Razavi (busted in 91st) and Boris Becker who was out in 97th. Of the two other players we tipped for deep runs, Eugene Katchalov remains in sixth place with just over half the chip stack of the leaders after coming from behind with 8♠ 8♣ versus 10♥ 10♦, while Martin Schleich clings on in eighteenth with just 26 big blinds and drawn on a tough table which includes the Spaniards Raul Mestre and Marcos Fernandez.

A fantastic story revolved around Irish qualifier, Alan McIntyre, who on Day 2 had at one stage been down to his last two big blinds. Returning on Day 3 still short-stacked, he got paid off in one of the first hands of the day with A♠ J♣ against Russian Dmitry Gromov´s A♦ 7♠ and then held on with Q♣ Q♠ against Lithuanian Vytautas Milvydas´s A♣ 8♠. Ultimately Alan was busted out in 92nd; however he recorded his biggest ever live cash of €10,000 in the process.

Incredibly, no previous EPT Main Event Champion is left in the field. This means there have now been 8 seasons without a dual European Poker Tour Main Event winner. Play today (Wednesday) continues until just the final eight remain – who will play to a conclusion on Thursday.