Czech Tomas Junek picked up his first bracelet after taking down the $1,500 buy-in No-Limit Hold’em event #56 at the World Series of Poker (WSOP) in Las Vegas. 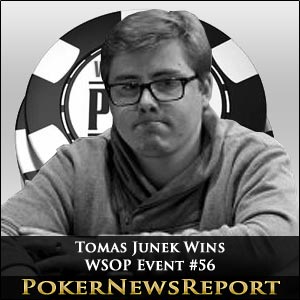 Czech Tomas Junek picked up his first bracelet after taking down the $1,500 buy-in No-Limit Hold’em event #56 at the World Series of Poker (WSOP) in Las Vegas.

Junek was not only collecting his first piece of WSOP jewellery, as well as $661,022, after beating Australian David Borg heads-up, but his first cash at the series after outlasting 2,797 other entrants at the Rio All-Suite Hotel & Casino.

Just 22 players made it into Day 3 of this tournament, but it was Junek, of Vysoke Myto, who ultimately emerged victorious after defeating Borg to leave the runner-up from Sydney with $410,517, while Californian Donald Vogel – who had topped the chip counts for two days – claimed third spot for $289,530.

Additionally, Danish pro Peter Eastgate – who took down the 2008 main event – failed in his attempt to become the first winner of the principal tournament to bag a second bracelet since Carlos Mortensen, of Ecuador, followed up his 2001 main event win with success in the $5,000 buy-in Limit Hold’em event #34 in 2003 as he exited in fourth place for $209,111.

With Vogel ousted in third by Junek, the Czech player and Borg were left to battle it out heads-up. Junek gained an early advantage, but Borg then doubled-up with a flush.

However, after less than 30 minutes of head-to-head play, Junek pocketed the gold bracelet. The final hand saw Borg raise to 250,000, with Junek taking his time before three-betting 700,000. Borg then shoved all-in, to be swiftly called by Junek for a showdown.

Junek showed 10♦ 10♥ to be well ahead of Borg’s K♠ 5♠ pre-flop. Both players’ rails became very animated and noisy ahead of the 2♥ 5♥ 4♣ flop, with Borg making a pair, although he needed much more to stay alive.

The A♠ turn brought a straight draw for a chop, leaving Borg needing a king, five or three to survive. However, the 6♥ was no good to him and Junek’s supporters ran to their champion, almost toppling the table as they did so!

The 10 remaining players were then moved to the Pavilion Room’s main stage to complete the event, with Italian Gianluca Mattia being eliminated in 10th for $38,037 inside the first few hands of 10-handed play.

Now that the line-up for the official final table was known, play slowed down somewhat as Junek held the chip lead and Borg became the short stack. However, this quite period couldn’t last and a three-player pot saw Florida’s Eliyahu Levy come out on top to hold a huge stack after eliminating Lebanon’s Bassel Moussa in ninth place for $49,105. Tomas Trampota, of Wisconsin, was next to exit in eighth for $64,101 after being crippled in the hand that saw Moussa knocked out.

All the while, Borg was climbing up the leaderboard – strengthening his position when taking down a big pot against Junek – as Vegas-based Steven Goldberg hit the rail in seventh for $84,649 and Californian Andrew Taylor left in sixth for $113,092.

Eastgate was fortunate enough to emulate Junek when doubling-up through Levy, while Vogel managed a similar feat against the Czech’s A♥ J♣ when his K♠ J♥ came from behind to catch the K♠ on the turn.

But these short stack double-ups had to end soon, with Levy exiting in fifth place for $152,867 when losing a massive pot to Junek that gave the Czech a dominating lead with about half the chips in play.

Odense’s Eastgate hit the rail in fourth when his J♥ 10♥ failed to overcome the 9♥ 9♠ of Borg, before Vogel fell in third after his A♦ 5♠ couldn’t improve against Junek’s A♠ Q♠.