Marchese won the battle of the re-entries to capture the WPT Super High Roller title from Andrew Robl after a fascinating and protracted heads-up of 2½ hours. 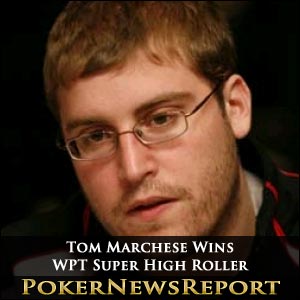 Tom Marchese won the battle of the re-entries to capture the WPT Super High Roller title from Andrew Robl after a fascinating and protracted heads-up battle which lasted over 2½ hours.

The two players – who were both knocked out and re-entered the $100,000 buy-in tournament on Day 1 – shared 77 hands in the heads-up finale to the tournament, which could have gone either way right up until the end.

After all the re-entries and late registrations, the prize pool totalled $3,315,000 from which the winner would receive $1,308,405. Only five places were to be paid, and as the final six players took their seats the chip stacks looked like this:-

The final table looked closely matched with only Bill Klein seemingly at risk. The California poker player, who had already stated that all his winnings were to go to charity, only had sufficient chips for 12 big blinds but a double up against chip-leader Daniel Perper in the very first hand of the day put Bill right back in contention.

Justin Bonomo, who had led the tournament at the end of the first day, was the first player to depart and the only one of the final table of six not to cash. His elimination of Erik Seidel (8th) and Dan Smith (7th) had given him a competitive pile of chips after being short-stacked for most of Thursday, but he was caught out by John Juanda´s K♦ K♥ after called Juanda´s post-flop shove with A♦ 10♠ on a board of 10♥ 7♠ 5♠. The turn (7♥) and river (9♥) failed to produce the Ace or Ten Bonomo needed, and he was sent to the rail while Juanda took the chip lead.

Klein Falls to Robl and Perper Falls to Juanda

John Juanda also had to come from behind to eliminate Daniel Perper and grab back the chip lead. Perper had shoved his last 1.4 million chips into the pot from the small blind with K♥K♠. Juanda called with A♦ 10♦, and was still behind despite pairing his Ten on the flop (10♥ 8♥ 2♣). The 8♣ on the turn helped neither player, but the A♥ on the river gave Juanda a better two pair and sent Perper out of the event.

For the next two levels, the chip lead flip-flopped between Juanda, Robl and Marchese. After 81 hands of three-handed play, John Juanda´s luck deserted him after a pre-flop all-in confrontation against Andrew Robl. With blinds at 50,000/100,000 ante 10,000, Robl raised to 250,000 from the small blind. Juanda re-raised to 750,000 from the big blind and Robl moved all-in. Juanda called with 9♣ 9♠, but would need some good fortune to overcome Robl´s A♣ A♠.

Unfortunately for Juanda, the board ran 5♦ 4♠ 3♠ / K♥ / 3♣ and he was eliminated in third place – Robl´s win setting up a fairly level contest against Tom Marchese in the heads-up with chip counts after Juanda´s elimination as follow:

Fascinating Heads-Up Could Go Either Way

The early hands of the heads-up were played like a chess game. Only one hand went to showdown in the whole of the next level, with both players holding a flopped pair of Kings, but Andrew Robl having a better kicker to enable him to take a 2:1 chip lead.

Level 24 started with Tom Marchese doubling up with a rivered straight, only for Andrew Robl to gain the advantage back in the very next hand when his A♦ 5♠ both paired on the board. Marchese regained the chip lead when forcing Robl to fold on the turn in a pot worth 7.45 million chips, and then Robl fought back when catching trip 8s to bring his chip deficit  to within 10 big blinds.

However, four hands after trip Eights helped Andrew Robl back into the game, it was a set of Eights which provided the winning hand for Tom Marchese.

The flop of 10♣ 8♦ 5♥ practically sealed victory for Marchese and the J♥ on the turn confirmed it. The river card (Q♠) was dealt just to complete the hand while Tom Marchese turned in celebration to those on the rail who had supported him through the tense climax to an absorbing competition.

Tom collected the winner´s trophy and cheque for $1,308,405, with the remaining payouts as follow:-