One of the two remaining “Professional” from the pre-Rational Group days, Tom Dwan has parted ways with Full Tilt Poker. 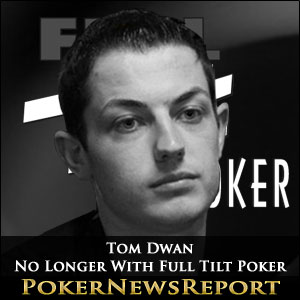 One of the two remaining “Professional” from the pre-Rational Group days, Tom Dwan has parted ways with Full Tilt Poker.

For years, Tom “durrrr” Dwan was the stoic face of Full Tilt Poker. As famous for his high stakes antics as he was for the notorious “Durrrr Challenge” Tom’s quiet composure and generally soft spoken demeanor was almost as defining as the young New Jersey native’s seemingly unparalleled poker ability.

And now, Dwan’s time as one of “The Professionals” on Full Tilt has come to an end. Speculation that Tom was no longer sponsored by the site began over the weekend when users on the 2+2 forums noticed his absence from FTP’s sponsored pros page.

Then, on Monday, news of Tom’s departure became official. According to a statement secured by PokerListings.com:

Full Tilt Poker and Tom Dwan have agreed to part ways following the recent expiration of Dwan’s contract. To have one of the most respected names in poker on our team has been a great pleasure. We will continue to watch Tom at the tables and wish him every success in the future.

For those who follow Tom Dwan closely, the news of his farewell comes as little surprise. Dwan hasn’t exactly been much of an ambassador for the site lately, skipping the Full Tilt Poker Galway festival and arriving exceedingly late for a heads-up match pitting cross promotional Team PokerStars Pro against The Professionals.

But why did Dwan, who became nearly synonymous with FTP back in its 2009 heyday, suddenly turn his back on his long-time ally? It’s possible that in the aftermath of the Black Friday scandal, Dwan no longer wanted to be associated with the previous Full Tilt that conned its patrons out of funds. Or it could be as simple as Dwan no longer having any desire to play against top ranking professionals, when he could just as easily beat up on the businessmen in Macau.

Speaking of which, with Dwan gone, what will become of the in-progress match between him and Dan “Jungleman12” Cates? The two came to an agreement in September to resume their match, and now it appears that Dwan will incur financial penalties for opting out. Given that Tom is reportedly earning so much in Macau that he has relocated there, it stands to reason that he probably doesn’t care.

For now, original Professional Gus Hansen and Victor “Isildur1” Blom will have to carry the torch for FTP. So long durrrr.