Tom Dwan Makes Multi-Millions in Macau – From Just One Hand!

Tom ‘durrrr’ Dwan has been somewhat conspicuous by his absence from the live tournament poker scene recently – but he’s been active in the high stakes action in Macau. 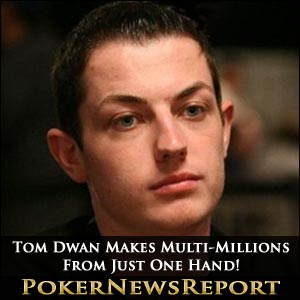 American pro Tom ‘durrrr’ Dwan has been somewhat conspicuous by his absence from the live tournament poker scene recently – but that doesn’t mean he’s not been active in the high stakes action over in Macau.

The 25-year-old from New Jersey might have lost his huge sponsorship deal with collapsed poker room Full Tilt after the events of Black Friday last April, but he is believed to have added an incredible $3.86 million (HKD$30 million) to his more-than-healthy bankroll – from just one hand!

Yes, you read that correctly. There is no need to visit an optician for an eye test quite yet. Mind you, I’m still rubbing my eyes in disbelief as I write this, so maybe I’ll be getting a check-up soon.

The cash game specialist was in the Chinese special administrative region when he took down what is thought to be the biggest pot ever – against a wealthy Chinese businessman during a No-Limit Hold’em game with the blinds at approximately $1,300 and $2,600 (that’s HKD$10,000/HKD$20,000).

While the exact details of the hand are unclear, Poker Portal Asia revealed that it is believed Dwan held ace-ten against his Asian opponent’s ace-two on a flop of A-10-2 while playing in The Big Game at StarWorld Hotel’s Poker King Club.

However, the Asian website also stated that, while the pot was certainly the biggest of the night…it’s not known whether Dwan left a winner or not at the end of the session.

Now, that would be incredible. But, as we all know, high stakes games can result in massive swings as hands escalate almost out of control and beyond belief.

Either way, it looks like Dwan now holds two incredible records, with this massive pot dwarfing those – which are thought to be about the $2 million mark – won by dynamic Dane Gus Hansen and Englishman Sam Trickett in Macau recently.

What is the second record? Well, Dwan also took down the largest pot in television history when he picked up $1.1 million against eight-time World Series of Poker (WSOP) bracelet winner Phil Ivey during the Million Dollar Cash game in 2010.

But Dwan isn’t the only superstar enjoying his time out east as fellow American Andrew Robl has been in Macau recently, along with Trickett and Hansen. The Las Vegas pro was only there for a short time, but he did also confirm his participation in the $1 million buy-in The Big One for One Drop charity tournament that will be staged during the 43rd annual WSOP in his home town.

The high stakes cash specialist took to microblogging website Twitter to write: Excited to play poker for big money and help charity by playing the $1,000,000 tournament for @ONEDROPdotorg at the WSOP this summer.

While no one hand will surpass Dwan’s glorious triumph in Macau, the One Drop winner in Sin City is already certain of picking up more than $12 million, so expect the likes of Robl, Dwan, Trickett, Hansen, Team Party Poker Pro Tony G, Daniel Negreanu and Bertrand ‘ElkY’ Grospellier to be going all-out for victory.