Railbirds of high stakes heads-up action will be pleased to know that the match between Dan “jungleman12” Cates and Tom “durrrr” Dwan is back on. 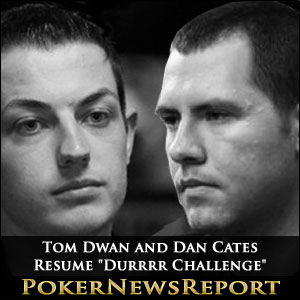 Railbirds of high stakes heads-up action will be pleased to know that the match between Dan “jungleman12” Cates and Tom “durrrr” Dwan is back on.

Following more than a two-year hiatus due to the shutdown of Full Tilt a couple months after Black Friday, the two pros have resumed their heads-up battle. Cates took to Twitter last month in an attempt to goad Dwan into getting back on the felt. Cates insinuated that Dwan was ignoring him and finding time to play many others since Full Tilt relaunched last November.

His tweets apparently worked, as the challenge resumed Monday at $200/$400 No-Limit spread out over four tables, albeit briefly. Only a few hundred hands were contested before the pair again parted ways with promises of continuing the match in coming days. Dwan eaked out a slight advantage in Monday’s action, but Cates still leads the overall match. The exact amount is unknown at this time. But there is plenty of time for Dwan to catch up, as only about 21,000 hands have been completed thus far.

Cates was anxious to resume the challenge because Dwan is giving 3-1 odds on the action. The pair have agreed to play a total of 50,000 hands. If Dwan should come out on top, Cates has to fork over $500,000. But if “jungleman12” outlasts Dwan, then “durrr” has to pay his opponent $1.5 million. That’s in addition to money won and lost on the poker tables.

The 23-year-old Cates is a Maryland native who studied economics at the University of Maryland but left college to pursue poker full-time. He slowly worked his way up the ladder of low to high stakes and has earned a reputation as one of the most formidable heads-up No-Limit Hold’em players the world over, winning millions.

Dwan also exited college prior to graduating in order to focus on poker. The 26-year-old attended Boston University before also progressing from a low to high stakes player in online action. Dwan has won and lost millions over the course of his career and is well-respected in both online and live play. Dwan was a Team Full Tilt pro prior to Black Friday and also re-signed as one of “The Professionals” just prior to the site’s relaunch.

The “Durrr Challenge” versus Cates began in August of 2010. From the looks of things, the heads-up pros will be squaring off on the high stakes Full Tilt tables quite often this spring and summer. Hopefully, the match won’t face any more long delays.