Tom Creel practically led the final table of the WSOPC Horseshoe Bossier City Main Event from start to finish for his first Circuit ring and the $144,537 prize. 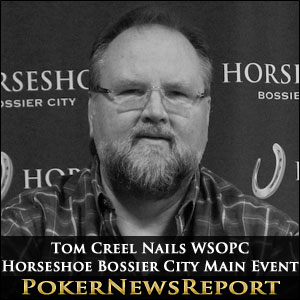 Tom Creel practically led the final table of the WSOPC Horseshoe Bossier City Main Event from start to finish for his first Circuit ring and the $144,537 prize.

The most recent stop on the WSOPC tour was at the Horseshoe Casino in Bossier City, Louisiana, and the $1,675 buy-in Main Event attracted 438 entries – creating a prize pool of $657,000. Players who bust out on Day 1A had the option of re-entering on Day 1B and consequently 81 players returned to do battle on Day 2.

With only the top forty-five players cashing in the WSOPC Horseshoe Bossier City Main Event, the early action on Day 2 was decidedly slow. However, when the bubble burst and the remaining players were assured of a $2,970 min-cash, the tempo quickened, and the final table of nine was set at the beginning of Level 25 (blinds 12,000/24,000 – ante 4,000).

The start of Day 3 witnessed several players who needed to get involved early enjoying mixed fortunes. Jason Lang got an early double-up against Jeff Niedelman J♣ J♥ > 5♦ 5♠ and Cord Garcia managed to get a couple of uncontested shoves through to pick up the valuable blinds and antes. However, Rob Salaburu tried to force the action in the early hands, but was constantly getting three-bet pre-flop and saw his stack dwindle down to 300,000 chips.

Susan Kattamuri´s departure from the final table in ninth place was considerably more dramatic, as she ran her 9♦ 9♥ into Jason Lang´s pocket Aces, and Lang just about had enough chips to cover Kattamuri´s shove and move up to over 1,000,000 chips. It was also the case of “just having enough chips” when Rob Salaburu moved all-in just before the end of the first level and was called by Cord Garcia. Salaburu was favourite to double-up with A♣ J♦ against Garcia´s K♥ Q♣, but the K♣ on the flop gave Garcia the better hand, and Rob Salaburu was eliminated in eighth place.

Jeff Niedelman never recovered from doubling up Jason Lang during the first level, and had been reduced to the short-stack at the final table. However, he saw an opportunity to double up against Tom Creel on a flop and turn of K♠ 7♦ 7♠ / 7♣, when Creel shoved after the Turn and Niedelman was holding 9♣ 9♦ for a Full House. Niedelman made the call, but Tom Creel (K♦ Q♠) had a better Full House, and Niedelman was sent to the rail in seventh.

Whereas Jeff Niedelman knew his fate the second the cards were on their backs, Daniel Lowery had to sweat through a sick flop when getting the last of his chips in with Q♥ 5♥ and running into Sean Small´s Q♣ Q♠. Lowery was out of his chair and walking towards the door before he called back following the flop of 9♥ 5♠ 2♦ paired his lower card. The Turn of 10♥ also gave him outs to a flush, but the A♣ on the river sealed Daniel Lowery´s fate, and he was gone in sixth place.

Lang and Phelps Bust as Battle Develops for the Lead

Three-handed play developed into a battle for the chip lead between Sean Small and Tom Creel, with Cord Garcia picking up the scraps whenever possible. Small temporarily held the chip lead once again when flopping two pairs (Q♠ 3♦) in a million chip pot, but Tom Creel battled back when he flopped two pairs himself (8♦ 2♥); and it was only when Sean Small knocked out Cord Garcia in third (A♣ Q♣ < K♣ J♦) that a significant gap opened up between the two protagonists.

Small Leads into Heads Up, but Creel Runs Hot

Despite taking a forty Big Blind advantage into the heads-up, Sean Small had no answer to the good fortune enjoyed by Tom Creel on his way to victory. Creel flopped a set of Fives in the last hand of Level 28 to equal up the chip stacks, and then regained the chip in one of the first hands of Level 29 when his 10♦ 5♣ hit the 10♠ on the Turn and 5♦ on the River to take down a million chip pot.