After a hectic weekend of action in Dublin, the Boylepoker International Poker Open is down to just eight players – and is led by the last UK player standing. 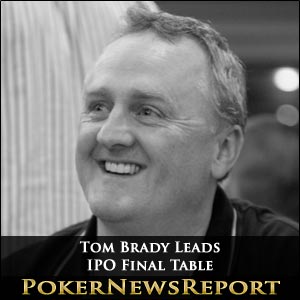 After a hectic weekend of action in Dublin, the Boylepoker International Poker Open is down to just eight players – and is led by the last UK player standing.

Organisers may have been disappointed that “only” 1,148 players turned up to compete in the Boylepoker sponsored International Poker Open at Dublin´s Regency Hotel, and that the record for Europe´s largest live poker tournament remains with Dusk till Dawn for another year, but the eight remaining players chasing the IPO title will have different considerations when the final table is played out to a winner on November 10th.

Massive jumps exist in the payout structure for the final eight players, and although the first player eliminated from the table will collect €6,375 for their €200.00 + €30.00 buy-in, a far more magnificent €42,530 awaits the winner of the tournament. Current chip leader, Tom Brady, has plenty of live poker playing experience behind him but will need it to contend with the challenges before him from five true Irishmen, one monsieur from Versaille and a Dublin-based, USA-born female poker player whose favourite poker quote is Nobody wants to lose to a girl on TV.

Meanwhile, in a Bar in the Regency…

While Day 2 of the International Poker Open was being played out in the card room of the Regency Hotel, the Irish Poker Awards were being distributed to players and personalities voted for by their compatriots over the past few weeks.

The full list of winners is featured below, but special mention should be made for “Breakout Player of the Year” Niall Smyth who – in 2011 – won the Irish Poker Open and Ladbrokes IPF Main Event before just missing out on a final table seat in the Irish Winter Festival Main Event (which starts again next weekend).

Jason Tomkins collected “Best Tournament Player” after his headline display in the recent EPT San Remo, while Chris Dowling was voted “Best Cash Player” and Eoghan O´Dea captured the title of “Player of the Year”. There was only one award this year for 888 Poker´s Padraig Parkinson – who was out-blogged by Dara O´Kearney and less personable than Phil Baker – but who was honoured to be voted the first “Irish Poker Legend”.