Tom Alner has taken out the Macau Poker Cup Red Dragon Main Event, winning HK$723,000 (around US93,240) and an entry in the Asia Championship of Poker (ACOP) Main Event. 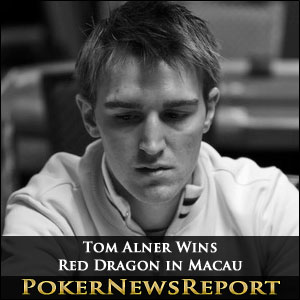 Tom Alner has taken out the Macau Poker Cup Red Dragon Main Event, winning HK$723,000 (around US93,240) and an entry in the Asia Championship of Poker (ACOP) Main Event.

The British poker pro beat a field of 645 to take out the event in what was a long and highly competitive final table. It looked like it was going to be a quick day when the third and final day of play first began, as the remaining 21 player field decreased in a quick fashion.

Soon enough, the nine player final table was formed, and it was a diverse bunch of players from all over the world. The first player to be eliminated from the final table was Japanese pro Shinichi Takenouchi, who was beaten by the A♠ A♦ of Thomas Ward to be knocked out of the event.

Eighth place went to Portuguese player Joao Pedro de Castro, who was eliminated after he lost a showdown to Frank Maley. De Castro went all in before the flop with Q♦ J♠ and was called by Maley, who was initially ahead with A♥ K♥.

Maley moved further ahead after the flop came 8♥ 6♦ K♠, and strengthened his lead after the (As} came on the turn. He was not fully out of trouble, though, as a 10 on the river would have kept de Castro in the game. It didn’t happen, however, as the Q♣ came on the river, putting an end to the Portuguese player’s time in the tournament.

That was something unknown to Maley, who went all in with A♥ J♥ after the J♦ came on the turn. Ward promptly called and was confirmed the winner of the hand after the 8♠ came on the river, knocking Maley out of the event in seventh spot.

It took about two hours for the next player to be eliminated from the Main Event. That player was one time chip leader Brian Yip, who was down to just 175,000 chips when he decided to move all in.

Fifth place went to New Zealander Thomas Ward, who was eliminated from the final table after coming second best in a showdown against Wilson Fu. Fu went all in before the flop with A♦ 3♠ and was called by Ward, who was pretty far behind with J♥ 8♠.

Fu stayed in front after the flop came 7♣ 6♦ Q♥, but a Jack or an Eight on the turn or river could have turned things into Ward’s favour. It was not to be, however, as the Q♠ came on the turn and the 6♥ came on the river, which ended the New Zealander’s run in the Main Event.

That left just four players in the Red Dragon event and they immediately stopped play to make a deal. It took around 20 minutes for a deal to be agreed on and play promptly resumed.

Russian Victor Sheerman was eliminated in fourth place after he lost a showdown to the eventual winner. Sheerman went all in before the flop with A♠ 3♥ and was called by Alner, who showed 7♣ 7♠.

Sheerman did get a pair of Threes when the flop came 4♠ 3♣ 6♥, but the Brit was still in front. It stayed that way as the 10♠ came on the turn and the 4♣ came on the river. While Sheerman was sent packing, he netted the biggest cash payment of the event (HK$853,000) as he was the chip leader when the deal was struck.

Alner then claimed his second successive final table scalp as he knocked Fu out of the tournament in third place. Fu went all in before the flop with A♠ 8♦ and was called by the Brit, who had him dominated with A♦ J♠.

The eventual winner stayed in front when the flop came K♣ K♦ 9♦, but his fortunes changed when the 8♣ came on the turn. The river showed the A♣, but made Adler the winner of the hand as both players had a Two Pair of Aces and Kings. Adler, however, had the higher kicker with the Jack.

Fu’s elimination from the final table put Adler and Chong in heads up play, with Adler having a massive chip lead when play began. Heads up play did not last long; it only lasted two hands.

On the second and last hand of the event, Alner went all in before the flop with 7♦ 7♣ and was called by Chong, who showed Q♣ 10♣. The Brit went further ahead on the flop after it showed 7♥ 8♠ 9♠, but it did give Chong an open ended straight draw.

The A♦ on the turn and 2♥ on the river did not give Chong the cards that he needed, and Alner was declared the winner of the Macau Poker Cup Red Dragon Main Event.