The 2013 Asia Poker Tour (APT) Macau Main Event has wrapped up and Norwegian Henrik Tollefsen has taken out first place, winning HK$981,700 (around US$142,280) for his stellar play. 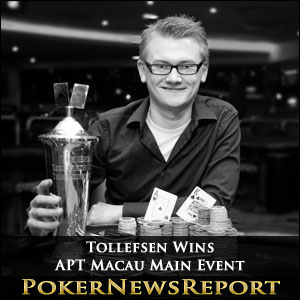 The 2013 Asia Poker Tour (APT) Macau Main Event has wrapped up and Norwegian Henrik Tollefsen has taken out first place, winning HK$981,700 (around US$142,280) for his stellar play.

Geng Jia was the first player to be eliminated from the final table as he lost his final hand of th tournament to John Conkright. Conkright raised before the flop with A♣ A♠ and had two callers, with Jia being one of them.

Australian Alvin Cheam was next to go after coming out on the wrong end of a show down to Cheryl Peng. After a series of raises and reraises, Cheam moved all in before the flop with A♠ Q♠ and was called by Peng, who showed A♣ 4♣.

Peng moved ahead after the flop came 4♣ 6♥ 8♠ and staying ahead when the 6♣ was shown on the turn. A Spade or Queen pn the river would have won Cheam the hand, but he would get neither as the 3♥ was instead shown.

Next to go was Feng Zhao, who was knocked out of the final table in sixth place by Phong Nguyen. Zhao moved all in before the flop with A♠ 10♦, and was called by Nguyen, who was just ahead with 7♥ 7♦.

Nguyen hit a full house after the flop came 3♠ 3♦ 3♥, but Zhao still had outs. They did come on the turn nor on the river, however, as the 4♠ and J♦ were the last two cards shown, ending Zhao’s time in the Main Event.

Fifth place went to Peng, who was eliminated from the tournament by the eventual winner. Both players raised and reraised one another before the flop and Tollefsen eventually moved all in with A♠ K♠. He was called by Peng, who was outkicked with A♦ Q♣.

The 10♠ 7♥ 4♠ kept the Norwegian in the lead, with a K on the turn putting him further in front. The 3♠ on the river was the nail in the coffin and Peng’s time in the tournament was over.

Tollefsen then claimed his second successive scalp of the final table after he eliminated Nguyen from the event. Nguyen went all in before the flop with 6♠ 6♣ and was called by Tollefsen, who showed A♥ J♣.

While Nguyen was in front, that changed after the flop came 10♦ A♦ 3♦. The 9♥ on the turn and 5♣ on the river did not help Nguyen and he was knocked out in fourth place while Tollefsen gained a massive chip lead.

The Norwegian then made it three scalps in a row after knocking Hui Wen out of the event. Wen moved all in before the flop with 10♣ 9♣ and was called by the eventual winner, who was ahead with A♥ 6♥.