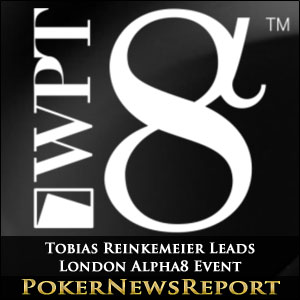 Despite a scheduling clash with the WPT Grand Prix de Paris, Day 1 of the £100,000 buy-in WPT Alpha8 London attracted 19 entries – one more than the inaugural Alpha8 event in August, with registration still open for late arrivals and those who want a second (expensive) bite of the cherry.

At the end of Day 1, German poker player Tobias Reinkemeier has a substantial advantage over the rest of the field courtesy of a massive three-way pot against Sorrell Mizzi and Antonio Esfandiari in which he Turned a Flush to best Mizzi´s missed straight draw and Esfandiari´s overpair.

Mizzi was eliminated in the hand and Esfandiari crippled and bust soon after. Esfandiari fired a second bullet, but was eliminated again before the close of play (second pair < Tony Guoga´s top pair which improved into a Full House) – justifying Guoga´s dash from Paris and ensuring that he finished the day in a better mood than he started it!

Quality Field More Than Making Up The Numbers

Those who bust out of the WPT Alpha8 London during Day 1 have the option of re-entering during the first two levels of Day 2 (two levels because Day 1 was shorter than advertised). Erik Seidel and Sam Trickett may both take that option, while inaugural Alpha8 winner – David Silverman – may be tempted to chuck his remaining 38,700 chips and start again with a fresh 100,000 chip stack.

Bill Perkins – who finished in third in this year´s WSOP “One Drop” High Roller – is also expected to fly in for Day 2 of the London Alpha8 Event and there may be one or more surprise entries for players who have had enough of Paris and are on their way to the Isle of Man for next week´s UKIPT Main Event.

Looking Ahead to Day 2 of the WPT Alpha8 London

With only seven levels played yesterday (because only ten players had registered at the schedule start time), play will resume at the Palm Beach Casino in London´s Mayfair with blinds of 1,000/2,000 (ante 300). The tournament is scheduled to finish tonight – or the early hours of Wednesday morning – by which time one of the remaining players could be £1 million (pounds not dollars) richer off.

Tobias Reinkemeier is in the pole position to take his lifetime earnings above $8 million (and into the Top 30 on the all-time money list), but there is still a strong field behind him and anything could – and probably will – happen.