Hollywood star Tobey Maguire has chosen to settle his lawsuit over the winnings he collected from convicted conman Bradley Ruderman during high-stakes poker games. 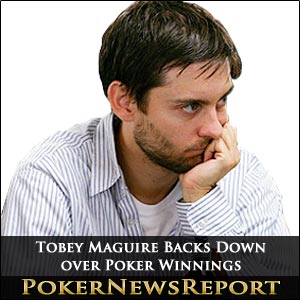 Hollywood star Tobey Maguire has chosen to settle his lawsuit over the winnings he collected from convicted conman Bradley Ruderman during high-stakes poker games.

The star of the Spider-Man series of movies – who was unaware of the scheme – has agreed to pay $80,000 that will settle the lawsuit that was filed for the $311,000 he received from Ponzi scheme operator Ruderman for Texas Hold’em games that were frequented by businessmen, celebrities and others.

A Ponzi scheme is a fraudulent investment operation that makes returns to investors from their own money or money paid by succeeding investors, as opposed to any profits made by an individual or organisation running the enterprise.

If a judge approves Maguire’s agreement next month, the 36-year-old actor will pass on the cash to bankruptcy trustee Howard Ehrenberg, who is attempting to retrieve the money Ruderman – a one-time hedge fund operator – swindled from several investors to support his extravagant lifestyle.

The retrieved cash will be used to help repay the scheme’s victims, who were conned out of their cash between 2006 and 2009. A total of 14 people from those who were sued have already settled their cases, leaving just eight more to decide.

Ehrenberg, who sued the group, said the settlements already total over $1.7 million, with Maguire’s settlement being in the same region as those who have already agreed to pay some cash back. In fact, Ehrenberg emphasised that Maguire’s arrangement was not “any better settlement than the others”.

However, in a statement, Maguire pointed put that he “strongly disputes that he violated any laws, rules or regulations in regard to participating in the poker games”, but had agreed to make the payment so as to avoid taking on a case that could prove to be costly.

The actor – who has also starred in movies such as Seabiscuit and The Cider House Rules – signed the agreement last Tuesday, with the settlement being filed with a bankruptcy court the following day.

Ehrenberg, who filed the lawsuits back in March this year in an attempt to recoup cash on behalf of Ruderman’s conned investors, claimed that Maguire and others should be denied their winnings as the games were unlicensed and held at private residences and affluent hotels.

However, Maguire, as well as the others sued, disagree that there was anything illegal about the games.

Maguire also pointed out that he lost $168,500 to Ruderman, who is now serving 10 years in a federal prison having pleading guilty to willful failure to file tax returns, two counts of investment adviser fraud, and two counts of wire fraud.

American billionaire Alec Gores – who made his fortune via leveraged buyouts of technology firms – and comedian and actor Gabe Kaplan, who starred in 1970s sitcom Welcome Back, Kotter, have also agreed to settle the cases filed against them. Gores, who last year tried to buy out Miramax Films, will pay $49,908 to settle a $445,500 lawsuit in relation to Ruderman’s payments, while Kaplan will return $26,900 after being sued for almost $63,000 in winnings.

While Maguire, Gores and Kaplan have settled out of court, several others being sued have not backed down, including director-actor Nick Cassavetes.

The 52-year-old’s solicitor agrees with Maguire’s assessment that the poker games were legal and added that the statute of limitations has already passed for following up criminal charges for the poker games.

However, even with several still fighting the case, Ehrenberg believes the remaining cases should be settled before going to trial.