Ontario’s Timothy Adams secured a third bracelet for Canada at this 43rd annual World Series of Poker (WSOP) with his success in event #28 in Las Vegas. 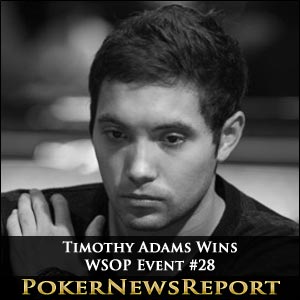 Ontario’s Timothy Adams secured a third bracelet for Canada at this 43rd annual World Series of Poker (WSOP) with his success in event #28 in Las Vegas.

The third and final day started with only eight players, although that was cut back to only five – with Moscow’s Andrey Gulyy (eighth for $38,279), Florida’s Toan Trinh (seventh for $38,279) and Torrey Reily (sixth for $70,280), of New Orleans, exiting – by the end of the first level to allow the final five to move to the Amazon Room’s ESPN Feature Table.

Gregory Merson Out in Fifth

Maryland’s Gregory Merson was the next to leave in fifth place for $70,280. Australian Brendon Rubie opened for 33,000 and Merson shoved all-in behind him. Rubie called to show A♠ Q♥ while Merson had the dominating A♥ K♦. However, Rubie paired his queen on the turn to send Merson crashing out.

Another Maryland player, Anthony Gregg, had been the short stack for the whole day and made his stand when shoving pre-flop while holding A♠ 3♣. Rubie made the call with pocket twos and, as Gregg’s hand failed to improve, he had to be content with fourth place and $114,711.

Three-handed play came to an end when California’s James Schaaf exited for $164,823. Adams and Schaaf both placed 48,000 in pre-flop to see a flop of Q♦ 2♠ 2♥. Schaaf check-called for the Q♣ to come on the turn. Both pros checked and the dealer placed the Q♠ river on the felt. Schaaf bet 175,000, only for Adams to put him all-in. Schaaf called to show pocket fours and was gone in third for $164,823 as Adams revealed pocket tens.

Heads-up play took three levels of rather uninspiring play. Adams and Rubie traded small pots, with the majority of hands being won with either minimum raising or two-betting.

However, the final hand did eventually arrive when Rubie, on the button, opened for 80,000 and Adams raised that to 225,000. Rubie called to see a 8♥ Q♣ 10♦ flop, which prompted Adams to lead out with 255,000. Rubie called and the 5♠ arrived on the turn. Adams shoved all-in and Rubie eventually called after a couple of minutes, but was in deep trouble. Rubie showed K♠ Q♥ for top pair while Adams held A♣ Q♠ for the same hand but with a better kicker. But the A♠ river confirmed Adams as champion after pairing his ace. Sydney’s Rubie left with $242,458 as a consolation.

But Jake Cody and Nick Schulman failed to make the cash, with the latter the money bubble boy in 81st place.