Tiltware hits back at Phil Ivey’s decision to electronically file a lawsuit against them by accusing Ivey of bringing a meritless lawsuit. 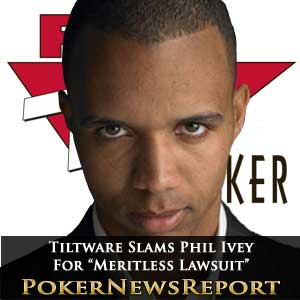 Tiltware have hit back at Phil Ivey’s decision to “electronically” file a lawsuit against the marketing and software company by accusing the star poker player of bringing a “meritless lawsuit” that “is about helping just one player – himself”.

Phil Ivey had stated on Monday evening that he would not be attending the World Series of Poker (WSOP) of 2011, which began on Tuesday in Las Vegas, as he does not “believe it is fair that I compete when others cannot”.

Of course, this statement refers to the fact Full Tilt Poker has, as yet, failed to return funds to players registered with the poker website after it was shut down, along with PokerStars and Absolute Poker, on April 15 – or ‘Black Friday’ – by the US department of Justice (DoJ), with charges of illegal gambling, bank fraud and money laundering.

While PokerStars have reached an agreement with the DoJ to begin returning cash to players, Full Tilt has still to broker any such deal – although it appears some accounts have been unfrozen – with Ivey saying he is “deeply disappointed and embarrassed” that the poker site’s American players have been left in limbo and unable to access accounts.

Full Tilt had previously announced that “we still do not have a specific timeframe” for the release of funds, which appeared to anger eight-time WSOP bracelet winner Ivey and result in his withdrawal from the most prestigious poker tournament in the world.

Californian Ivey – who was a Full Tilt Pro – has now retained Vegas lawyer David Z Chesnoff for his lawsuit, which was filed at the District Court of Clark County in Nevada.

The lawsuit is, of course, fairly complicated and lengthy in its wording, but the essence of the action can be quickly summed up.

The 35-year-old has decided to sue for damages, declaratory relief and injunctive relief.

Ivey’s demands for injunctive relief is the first cause of action, focusing on the player’s non-competition contract as he claims it is now unenforceable following Full Tilt’s breach of contract – which was to “provide software and related support for the conduct of legal online poker” – and, if retained, will cause him “irreparable harm”.

The second cause of action is breach of contract, with the complaint stating that Ivey “has been damaged by lost business opportunity, lost income, and damage to his personal and professional reputation”, amounting to a sum in excess of $150 million.

However, Tiltware has slammed the player for his “sanctimonious public statements”, claiming that “Phil Ivey’s meritless lawsuit is about helping just one player – himself”.

The statement continues by suggesting that Ivey – “in an effort to further enrich himself at the expense of others” – has “timed his lawsuit to thwart pending deals with several parties that would put money back in players’ pockets”.

Tiltware goes on to claim that Ivey “has been invited – and has declined – to take actions that could assist the company in these efforts, including paying back a large sum of money he owes the site”.

The company statement concludes by saying that they doubt that “Mr Ivey’s frivolous and self-serving lawsuit will ever get to court”, although, if that does happen, “the company looks forward to presenting facts demonstrating that Mr Ivey is putting his own narrow financial interests ahead of the players he professes to help”.

Strong words, I’m sure you’ll agree. This story is set to run and run, going well beyond the WSOP that Ivey is missing right now. It also seems certain that neither side will back down, so get ready for a high-profile court appearance from both parties at some point in the future.

Meanwhile, Victory Poker – another site hit by the ‘Black Friday’ indictments – has ceased to operate as a poker site. Instead, it will now function as an affiliate website for Cake Poker Network, with all tournament tickets, rewards and accounts transferring to Cake.

Dan Fleyshman, the chief executive officer of Victory Poker, said in a Facebook statement that he has “decided to transfer the VictoryPoker.com international player base over to CakePoker.com to manage”.

He added that “the brand will continue doing strategy, news and videos as an affiliate site”, while Fleyshman will focus “much more on my upcoming charity, consulting other companies and helping with Victory marketing”.

All Victory Poker’s American poker players had previously been transferred to the Cake Network, now this move will be applied to their international players.